I first thought that “Monticello” was either some kind of exotic cheese or strange musical instrument.

Turns out, it’s a lot more than that. It was the home of Thomas Jefferson. Considering that everyone around here knows everything there is to know about him, his house is rather important. This morning, we were fortunate enough to have been invited to his 270th birthday ceremony.

After a particularly odd night of heavy rain and thunderstorms, everyone awoke to a grey sky and drizzle. I could see many eyes threatening to close and a little disappointment in the sudden shift in the weather pattern. Yet, the lack of sunlight didn’t mean cooler temperatures. Instead we got a thick and clinging humidity. It crawled down your arms and stuck to your neck. In many ways, it was even more uncomfortable than the glaring heat we’ve experienced so far.

Nevertheless, the weather couldn’t put a dampener on the things we learned today.

We were driven in a glittery purple taxi/bus/coach/van, that could only be described as “funky” (in EVERY sense of the word), up to Monticello, just outside Charlottesville. We arrived at some sort of visitors centre, clearly constructed later to entertain tourists like ourselves. We scattered, bought souvenirs, explored and did typical touristy things.

Eventually, everyone who was there to celebrate such a momentous day, gathered together in the theatre. After a particularly stern performance of some well-known Civil War marching tunes by the “3rd U.S. Infantry Old Guard Fife and Drum Corps” (my, what a mouthful!), we got to the most intriguing part.

An address by Wendy Kopp, who received a Thomas Jefferson Foundation medal in citizen leadership (again, another mouthful) revealed to us another side of Jefferson’s tale. Up till now, we’ve been treated to the same tale; that of Jefferson’s notable exploits. A Founding Father, author of the Declaration of Independence, President of the USA, a cunning politician, a canny scientist, writer of over a thousand letters, speaker of several languages, architect of the University of Virginia etc.

It was such a massive shock to the system, however, to hear “hypocrite” added to the list. Within the Declaration, the words “all men are created equal” are easily identifiable and known across the globe.

Yet, Jefferson, who wrote these exact words, owned slaves.

The world has always had issues dealing with race relations and equality, and these issues are integral to the history of the USA. And still these issues, even after the Civil Rights Movement ended, surface and create friction in the country. Jefferson may have been a fantastic leader and an admirable man but even he couldn’t escape blame.

I can imagine there are even more arguments that could be tossed into the pot but, for now, I’ll say that it was an enlightening experience to see the full picture.

I was surprised to hear something so critical on his birthday. I would hate it if someone came up on stage and started declaring all my faults to loads of random strangers on any day, let alone my birthday. :S

From that, we went up to the top of the mountain to his house. At last, we had arrived at Monticello!

To say the least, it is an intriguing house.

He was clearly inspired by the works of the great Italian Renaissance architect, Andrea Palladio, as well as the Classical architectural style.

Jefferson drew much of his influence from Palladio’s villas, like the Villa Rotunda in Vicenza. Both have a dome in the centre and the rooms bleed out from this.

Yet, because he spent some time in Paris, he clearly observed the French Renaissance architects and implemented some of the motifs into this, to create something rather unique. Palladio’s villas are always very ordered and structured and follow a musical harmony. The rooms in Monticello follow the planning of a French apartment, where larger social areas are accessed first, and you have to continue moving through the space to find the smaller private areas further in.

And so, we get a fusion of the two.

Also, Jefferson clearly wasn’t a fan of stairs and nor would the present building authorities be a fan of his at Monticello. I struggle to see how more robust individuals could navigate them… 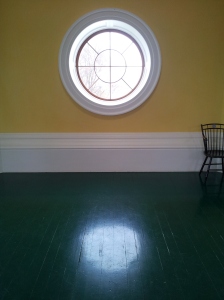 Inside the dome on the top floor

Apologies for that- it may seem really boring, but to me, it was fascinating!! I feel as though I can sort of connect through the architecture.

An interesting point is that the house felt very cottagey. We were used to the grandeur of the buildings of UVa, but it was clear that this house was for habitation. You could see that people once lived here. You could see where they slept, gathered, worked, ate and died. Because of this, Monticello has a distinct charm.

For me, this was Jefferson’s saving grace. Despite all his exploits, the great and the terrible, he was still human and appreciated the comfort of a home.

I’m quite happy with my own, naive and incredibly architecture-nerdy conclusion of Jefferson. I’ll let the more experienced scholars suck their teeth over the darker facts.

As I came to this conclusion, I noticed that the clouds had gone and the sunny, blue skies returned. Perhaps Jefferson is happy with my conclusion and that was his way of telling me.

That, or I’m just a stark-raving mad architecture student.

Either way works for me! 🙂 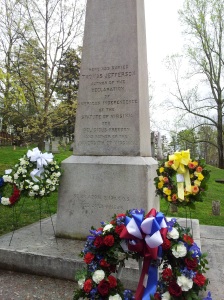