I spend an AWFUL lot of my time these days reading Harry Potter. Which seems like a waste of time, but it’s not! I bought the whole series in Spanish, weird covers and all, so now I can legit sit down for two hours with witches, wizards, Charms and Transfiguration and consider my time well spent.

I brought 1-3 with me to Spain. Onto ‘la cámara secreta’ now! 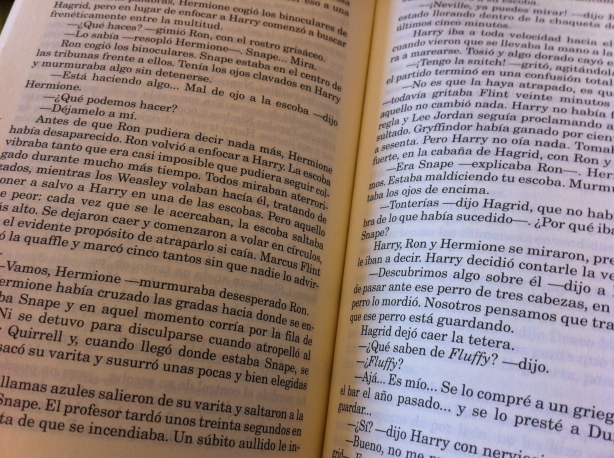 They don’t use speech marks in Spanish books, apparently. Took quite some getting used to…

You see, while Harry, Ron and Hermione have adventures around the castle, they are teaching me sexy new words, like ‘varita’ (wand), ‘lechuza’ (owl), and ‘guardabosques’ (gamekeeper). I now know how to say ‘to pretend’ (fingir) or ‘to duck’ (agacharse – which they seem to do ALL THE TIME – mostly in Quidditch, and the rest of the time they appear to just be throwing stuff at each other) or ‘to spill’ (derramar). I’ve got this vocab book that I keep next to me, and write down every single word I don’t recognise. 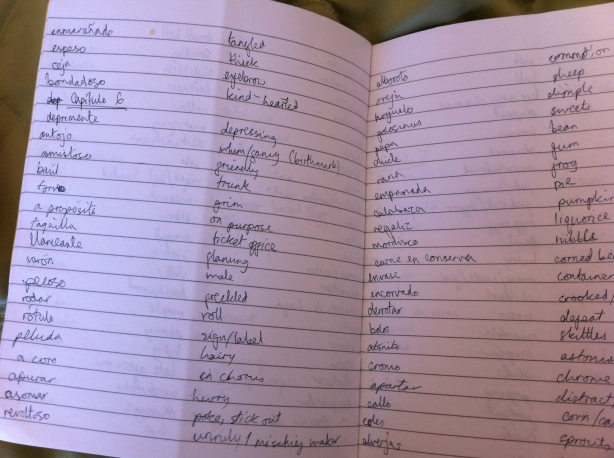 A list of some of the vocabulary from chapter six

This was a painfully long process in the first chapter, taking up about eight sides, but as the chapters have continued and I’ve actually learnt new words (and there’s a lot more dialogue and less description, which was the mofo of Chapter 1) it’s got down to about one side per chapter.

The one thing that really got me though, was when Harry and Hagrid turned up at Gringotts. It was describing the door, and it used the word ‘pulido’. I wrote the word down, typed it in to Google Translate, and got the word ‘polished’. Fair enough. But it was at that point that I thought – how do I know the word polished? I can count the number of times I’ve polished something on one hand, and even then not for years.

It’s a word that I know and remember purely from just existing in the English language. Some things in my world are polished, and somehow at some point I learnt what it meant, so now the word comes so naturally to me, that it didn’t even occur to me that there was a Spanish equivalent. And I bet that, even if I made friends with all the Spanish students in Alcalá, none of them would ever use the word ‘polished’ in conversation, and I would leave Spain still not knowing it. And then I realised, just how many words I know in the English language. Words that don’t apply to anything I do, or words from bygone eras (like the word bygone!), that a person wouldn’t be able to learn just by hanging around for five months.

Before coming to Spain, I thought that becoming fluent while here was something definitely achievable, almost certain. Now, I know that if I want to be fluent, I’m going to have to live in Spain for years, just existing and rarely learning anything new, just to be there for the one day where someone uses the Spanish equivalent of ‘nincompoop’.

Which brings me to another thing I’ve found since living in Spain, and that’s how frustrating it is to always have to speak Spanish. I naturally talk quite quickly, and having to speak in a slow and measured kind of way is incredibly infuriating. I can’t express myself on the fly (or use slang like ‘on the fly’) which is oddly claustrophobic. It’s definitely hard to talk about anything but trivial subjects since having a heart-to-heart is painfully slow, and punctuated frequently by ‘umm’s and ‘err’s and the like. This means that who I am, and what I think and feel, has to be filtered into what I can actually say.  It’s the linguistic equivalent of constantly having one arm tied behind your back. As such, I think if I didn’t get my regular dose of Skype or the English-speaking Internet, I’d go completely mad.

So, I can quite happily conclude that I will never live in Spain. Been there, done that, got the souvenir mugs and keyrings. I don’t want to have to go through years of linguistic inexactitude, living with just one arm! Of course, this means I’m never going to be fluent, but I think I’ll be perfectly happy to be nearly fluent, and be able to return to my bonnie Scotland!