Being chosen to blog on the first two days of our trip to the University of Madras in India seems like a bit of a short straw. While others may get to talk of what we are learning and to report on the amazing sights and experiences of our Indian adventure, the majority of these first two days were spent either travelling or resting from travel. The inside of an aircraft is not often a novel phenomenon, nor even an exciting one, to most people nowadays. However, the journey to Chennai marked the beginning of our long anticipated trip and was an exciting one for all of us. Our time in India, as much as anything, will be about the people we spend it with.  The waiting times at various airports lent themselves particularly well to conversation and, indeed, the entire journey was an opportunity to talk and get to know each other. The topic of these conversations inevitably ventured to our expectations and hopes for the trip. None of us had ever been to India. Perhaps this is foremost why everyone was filled with anticipation on this journey. We were excited to experience a country that we had only ever seen through someone else’s eyes. We were excited to learn about such a diverse nation.

It is with this sense of eagerness that the group met in Edinburgh airport at around 6:30am on the morning of the 15th of August. It was a tad difficult to feel that sense of excitement quite yet…it was a very early start and I think tiredness may have been the dominant feeling! Any fatigue over lack of sleep soon subsided as we boarded our first flight to Abu Dhabi. This flight lasted over seven hours. Etihad airways were however very diligent in providing a wide selection of films and television programmes to ensure none were bored. I can imagine that those blogging about successive days of our trip to India will have great photographs of breath-taking ancient structures and vibrant landscapes to share with you. I have attached a slightly less aesthetically pleasing photograph of our in-flight menu. For anyone thinking of flying to Abu Dhabi, the paprika chicken comes highly recommended!

Our choice of meals and beverages on our flight from Edinburgh to Abu Dhabi!

One meal, a snack and a couple of films later we arrived in Abu Dhabi. The wave of heat as we walked off the plane told us we were far away from Edinburgh. It was a brisk walk through Abu Dhabi airport in order to catch our next flight to Chennai itself. We had just enough time in the airport to catch glimpses of the beautiful mosaicked dome adorning the roof of the terminal. Our second flight of the day was slightly shorter, at around four hours, and followed pretty much the same routine of food and films interspersed with the occasional nap. We arrived in Chennai at the local time of around 4:30am. The same wave of hot and humid air as we experienced in Abu Dhabi had reinvented itself in Chennai. None of us were prepared for such heat at this hour of the morning!

Neither were we prepared for how busy the streets were at this time. On driving to the hotel we were amazed by how active the roads were. Upon arrival, we all decided to stay up for a spot of breakfast before heading for some rest. Almost all of the dishes on offer for breakfast had some concoction of spices contained within…a world away from the typical Edinburgh fare! Whilst Sunday was our first full day in India, the programme was relatively free. Being left to our own devices, the group decided to do a bit of shopping to get some more clothing appropriate to the Indian heat. We were ferried to the shop by auto-rickshaw which allowed us to experience the seemingly chaotic activity of the Indian roads for ourselves. 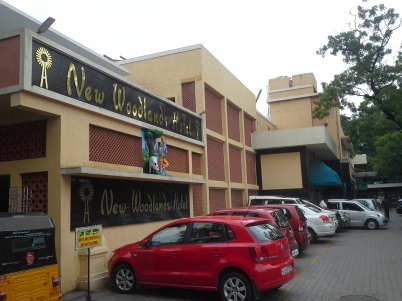 The final piece of our day was dinner with the team from the University of Madras. I think it is fair to say that many of us felt at home largely due to the very hospitable welcome from our hosts. I am certain that friendship and generosity of spirit will be continuing themes of our Indian journey.