India: Every mandate has a meaning… 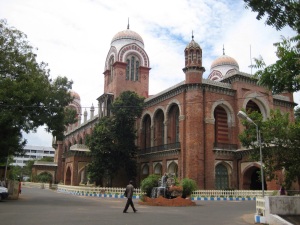 The University of Madras, Chennai

Today marked the official start of our programme at the University of Madras in Chennai, South India. On a Monday morning, slightly more rested from the long journey to Chennai, we were all eagerly anticipating the first day of lectures and cultural activities. After a quick breakfast – myself opting for a bowl of corn flakes instead of a curry (that’s one thing that might take a bit of getting used to!) – we headed off to the Politics and Public Administration department of the University, and quickly got into the swing of our classes.

The first lecture of the day was particularly eye-opening, focusing on societal classification structures – caste – and the issue of rape in India. I was particularly surprised by the linkage of the caste system to colonial times, where India was colonised by Britain, France and Portugal; and the distinct roles of men and women in Indian culture, compared to the relatively equal roles each sex plays within British culture. It appeared that the Indian government was heavily combating an ingrained “brahmanic patriarchy,” with violence and rape against females being commonplace, and often viewed as an attack against a family or caste. More interestingly, caste is often referred to in decisions within the Indian judicial system, which would be ludicrous by British standards!

Despite this, it seems the feminism movement in India has found root over the last few years, with the goal of ensuring women’s input and heterogeneity is respected. The organiser of the programme from Madras, Professor Ramu Manivannan, did say that “every mandate has a meaning.” The very fact we were addressed by a well-respected female lecturer may be an example of that.

Otherwise, after lunching on spicy curries and temple-visiting in the 38 degree heat, the words of a young Indian politics student unexpectedly passed a touch of solace: “How are you finding the heat? I need to stay indoors to get away from it today.” Maybe a Scot like me, built for insulation and ice, will fly through the next two weeks under the Indian sun without a hitch. Maybe.

Alison and I visiting Kapaleeshwarar Temple on our second full day in Chennai.

Our first Indian lunch… Of many!

My first ever (slightly terrifying) experience of a rickshaw ride. It’s a shame the driver took us to the wrong place!