‘The Journey is The Destination’ – Dan Eldon

The unofficial motto of the trip – ‘high impact’ – is well and truly on everyone’s lips after today. If one purpose of the programme was to confront us with another reality, to score away at our comfortable, atomised, lazily-monikered ‘Western’ expectations of life as it is and ought to be lived, then today was the day that it was fulfilled.

Our wake-up call was 05:30am, and we rose from thin mattresses lain atop straw mats on the hard floor of one of Gandhi-Mandela-King Farm’s Garden of Peace Trust School classrooms. After dressing in the previous day’s clothes and a quick cup of chai, we climbed to the building’s terrace to have an impromptu yoga class. Our teacher? None other than Professor Ramu Manivannan, our University of Madras Co-ordinator, himself. Though we had yet to see the man place his legs firmly behind his head, or contort himself into a graceful bridge, we were becoming increasingly impressed by the breadth of his ability. Polymaths are evidently the rule in India, rather than the exception.

Despite the Professor’s patience and warmest encouragement, few of our party could execute some of the more difficult positions. One of these, the bow, ended in hilarity as we tried and failed to stretch our arms far enough back to grasp our ankles. Thoroughly invigorated, and with the heat of the day beginning to make itself felt, we retired to shower, change, and make ready for breakfast. For my part, I made do with a bucket of rainwater over my head, resolving to brave a proper bucket shower after the morning’s activities.

The first of these was the planting of four new neem trees (a species noted for its being a natural insect repellent) before the building that hosted our temporary quarters. The children were eager, happy, naturally co-operative, and far more able than I was. Although I did my best to get stuck in, my hands were the least dirty by the time the sapling was ready to be watered in. Arboriculture withholds still its secrets from me as steadfastly as alchemy. The only thing I have ever been able to nurture from seed, to stem, to bud and bloom, are the words of the English language; a language we happen to share with India, and which made an unexpected appearance in one of the various pledges the schoolchildren made at an assembly which marked the beginning of the school day. ‘I love my country’ could be heard recited in unison amongst a cacophony of other austere pronouncements, most of which were not in English. This ceremonial declaration of allegiance to India caught me unawares, but on reflection I could see the merits of fostering national pride and loyalty in such a diverse country, particularly one which witnessed partition at its very birth.

The School at Gandhi-King-Mandela Farm

When the children began their lessons, we had the opportunity of an interaction with their parents in one of the older, traditionally built halls. We filed in, noticing immediately the strict gender segregation amongst them. The women were sitting cross-legged towards the front, facing the space reserved for us, while the men were at the back, in a mixture of stances from crossed legs to crouches, to standing. Few of the men donned the traditional doti, a sort of long robe that begins at the waist and is worn with a shirt or kurta, while all the women wore sarees. Santoj, the man at the head of the school, acted as interpreter to questions from both sides; questions ranging from the trivial: ‘what do you know of Scotland?’, to the profound: ‘which religion do you follow in Scotland?’ The answer to the first was the one we encountered time and again: ‘you have the best police in the world’, while the latter elicited some perplexed countenances on their part, making reference as it did to the element of atheism current in our society.

Most humbling, though, to hear from these agricultural day-workers was their aspiration that their children end up at university, like us. It was for this that they gave some hours of their precious time each week in return for their children’s attending the school. I only hope that they will get that chance.

Alison in Her Finery

Later on, in the same building, we were entertained by some performances by the children, including, impressively, a play entirely in Japanese, and entertained them in turn. Alison fetched her kilt for the occasion and put on the slightly incongruous spectacle of traditional Scottish dance to a bagpipe soundtrack in the oppressive humidity of South India. Two of the schoolgirls volunteered to try and replicate what they had seen, and the result was outstanding! Much better even than was afterwards my haphazard attempt to demonstrate a ceilidh dance that we had intended on teaching them. Moving outside, the better to facilitate a ceilidh, we decided that the Gay Gordons was perhaps too complex to teach a large group of energetic and excitable kids, and settled instead on Strip the Willow. Out of chaos came order, and a sheer, unadulterated joy for young and old alike. The little girls span with abandon, the jasmine which adorned their hair twirling beneath the still heat of the midday sun, while the boys aimed to out-dizzy their partners. 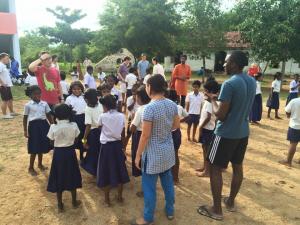 Next on the agenda, shortly after the children had gone home, was a football match in which the Professor and some volunteers also participated. Though my team lost, it was a great way to build up (further) an appetite for our evening meal, which was delicious as ever, served in a clay bowl and accompanied by the sweets that India excels at making.
In the evening some of us joined the Professor on a night-time forest walk to ascend a nearby promontory. There were various stipulations for participating. The first of these was an agreement to remain silent for the duration unless absolutely necessary. The second was the sparing use of artificial light. This was perhaps the most adventurous activity of our time thus far, and as we arduously padded over rocks and thorns the darkness became threatening, and shadows took on predatory forms, moving silently toward us. Storm clouds had been gathering all evening, and when we finally reached the summit, our luck ran out and a monsoon deluge, that seemed to thunder from the heavens, drenched us through. The straw mats we had brought with us ostensibly to aid in a meditative session beneath the stars quickly became instruments of shelter beneath a furious black squall. We looked utterly pathetic, human vulnerability on open display. Roughly five minutes later, the rain eased, and the Professor gave a reading on the nature of the soul. He spoke of his gratitude to have experienced the rain in the way that we did, and while I did share his enthusiasm, I was entertaining a concern that our somewhat precipitous route may by now be impassable, and I eyed the lightning breaking above our heads, and illuminating the landscape with it, with a little terror.

I needn’t have worried. Our descent was unremarkable, but for my slightly imperious command that Josh put down his umbrella. The lightning and thunder were almost simultaneous, and I didn’t want to risk his safety. Thankfully he understood where I was coming from, and complied. Needless to say, we were all more than a little relieved to arrive safely back at the school, and change into dry clothes before bed. 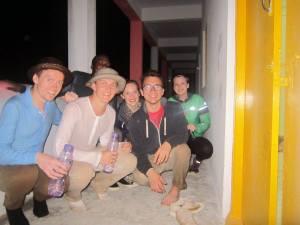 If, as Wilde said, ‘to live is the rarest thing in the world. Most people exist, that is all’, then today I firmly believe I transcended, at least for the briefest of moments, beneath the fervent monsoon rains of Southern India, the boundary between the two states. Today I truly lived.