My exchange year in Montreal has come to an end. It’s been one of the saddest goodbyes to this beautiful city, country, and to the people I met there. It has been one of the most ridiculous years of my life. I have somehow managed to get through a year at McGill (which is no small feat!) and somehow actually maintain my grades. I have learnt a lot from my Neuroscience courses which will stand me in very good stead for my fourth year studies. And then, between the lectures, midterms, assignments and finals, I managed to have a pop at some awesome sports.

My personal favourite was snowboarding. Having never even skied before, this was a whole new experience for me- flying down a (mostly icy) slope with my feet attached to a big metal board. What. Add in freezing temperatures and the real danger of frostbite. It sure was a fun experience!I never thought I would get into it as much as I did, but for proof of my undying love for the sport I actually cried when I had to give my rented snowboard back. I met so many cool people whilst doing it (and not just because all of the cool kids snowboard… although who am I kidding, they do). Some of my favourite people from this year were the people I hit the slops with; they push you to do a harder slope, complain with you about a -29 degree wind whilst sat on a chair lift, and laugh with you when you go nose-diving into deep snow.

Some of the other things I got up to were cross country skiing, snow-shoeing in the Rockies, abseiling to the bottom of a cliff over water then rock climb back up again, ice-canoeing, biking, hiking, dog-sledding. And finally, getting my very first roll in a kayak. This was probably my greatest achievement because I never actually thought I would get it. So it was such a triumph when I did and could keep on doing it when I kept capsizing myself playing kayak polo!

You can always think of things you didn’t do- I never managed to go ice-climbing, or see a moose. But in the end it doesn’t matter about those things. If I came away knowing that I had done everything, seen everything, well it would seem to me that I hadn’t written myself a long enough bucket-list. Canada is so beautiful and so vast. Even with a year living there, I didn’t get to about half of the places I would like to have seen. This, however, just gives me a great excuse to go back; when the Montreal Canadiens get to the Stanley cup final, when I have enough money to get up to the Hudson’s Bay… The adventure never seems to stop in Canada.

As for Montreal, I had the most perfect last week there. I decided not to go on a last, hurried canoe trip, but to spend a little time in the city where I have been living. Part of me really wants to regret doing it, the adventurous, ‘don’t sit still for a moment’ part. But the rest of me is so glad I stayed, walking around my favourite parts of the city in the warm weather (25 degrees- notice no minus sign!!), saying proper goodbyes to friends, walking through the McGill campus one final time. It was an appropriate farewell to a city that, against what I believed when I first got there, I have fallen completely in love with.

I will miss it more than I can possibly acknowledge in words. The life I had there. It was perfect. Perfect in the sense that it definitely had it’s ups and downs but I know that I wouldn’t have changed a thing. Now that I have left, it already feels like a dream. Some crazy, preposterous dream that I have just woken up from and won’t be able to fall back into.

So for now I have to say goodbye and thank you for one of my best years. To Montreal, Canada, and to all of the wonderful people I met there, you are always in my heart. 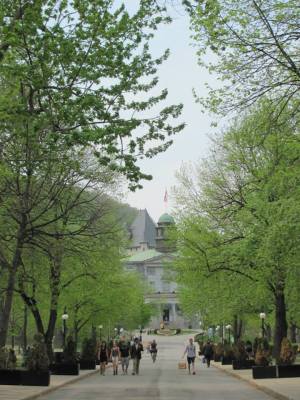