Have you ever seen any women more beautiful? 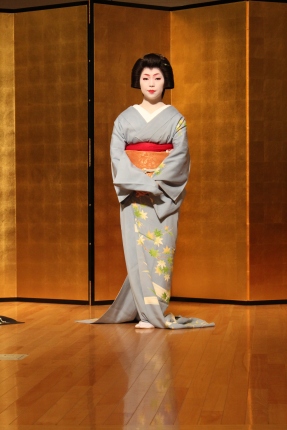 My preconception of the Geisha tradition in Japan only forced me to recognise that I have spent my whole life unaware of the full extent of beauty that is intertwined with Japanese culture and how similar their values and beliefs are to my own Indian background.

Our lecture yesterday on Maiko – the angelic young apprentices of Geisha’s – not only gave us all the opportunity to interact with each young girl and their veteran but also the chance to witness a spiritual dance dedicated to the four seasons of the year.

Their grace and their poise was completely intoxicating and there was not a moment of their performance or their presence on stage where I, or the rest of the group, where not entranced by their elegance and beauty. Not only that, but they were so endearing with their modesty and their kind natures that I felt that I was the most important person to them and what was more fantastic was that I knew that it was their duty to make those around them feel at home and comfortable but it did not ware off any of their spells in the slightest.

What makes me think that there is a lot in common with this aspect of Japanese culture with that of Indian culture is to do with the way the Miako’s moved their hands throughout the dance. When they were dancing each movement represented a significant meaning and in Indian culture it is much the same. When the hands reach up to the sky, for instance, it could be an offering to the Gods or when the eyes look away from the audience the dancer is likely to be searching for someone and most of the time it is their lover.

The list can go on but my knowledge of Natya Shastra of Bharata Muni (traditional Hindu/ Indian dance) is very minimal but it was interesting for me to see that there are resemblances between Asia and India that stem from things such as the value and importance of dance.

Miako and Geisha woman do not singularly represent Japanese arts but the value and importance given to hospitality and the respect that is encoded within their culture to nurture and bless everything and everyone around them.

The woman yesterday showed me how important it is to take in all that is around you and not to take it for granted: to give respect and acknowledgement to everything from the way the sun lies on the earth to the way in which people conduct themselves around you.

Most importantly they showed us the significance of how conducting yourself around others can be used to entrance and please. 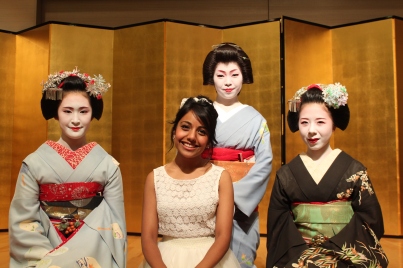