I can’t believe it’s been a week already, but here’s my blog of what’s happened in my first week in Korea.

Trying Korean food was one of my goals and I’ve definitely done well here. Right away on our first day at the university they prepared us a proper Korean feast. I was so hungry and tired from jetlag that I can’t even remember what we had (I need to update this goal to start remembering the names of the food as well as just trying them) but it was amazing. Sharing is a big part of the food culture here so certain places serve up about 15+ small plates of different dishes and everybody helps themselves. 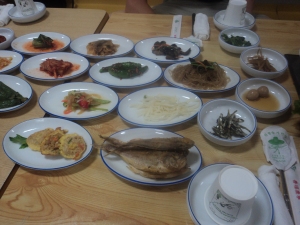 Slightly more authentic than the dinner of Cheetos and beer I picked up form the 7/11 on my first night just before bed (I was tired after a long flight and stopover, give a guy a break!).

Street food is great and so cheap too, and has been my dinner and lunch for the past three days alone. Just today I pointed at something deep fried and in batter, just wanting the one, and ended up getting about five pieces as one portion. Chicken and beer is another Korean favourite it seems, so there’s been no problem there when it came to consuming that.

There’s something great about watching meat cook right in front of your eyes so my first Korean bbq was as great an experience as it was delicious – sorry vegetarians. It’s not all about meat however, as the traditional dish of kimchi is nice too. And here’s a massive plate of spicy chicken and vegetables that cooks in front of you while you wait, drooling.

The local E-Mart has staff giving out loads of free food, it’s maybe 2 or 3 max in supermarkets in the UK, here there’s someone giving out free samples on every aisle . Due to being on a limited budget I do think the food in the supermarkets here is expensive, so I try my best to get the free food. They seem happy feeding the foreigner so that’s lunch sorted a couple of times a week for the rest of the trip then!

I’ve also visited the World Cup stadium and Olympic Park here which hosting the respective events were proud moments in the development of modern Korea; those visits were definitely nothing to do with me being a massive sports fan, I swear! Learning the history and culture is really interesting so I’m above target on that goal that I set myself. 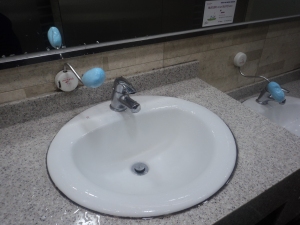 Due to having two classes everyday and weekend activities arranged by the university I think I will struggle for time to do anything related to Korean Buddhism (apart from study it in class, of course). Therefore I have decided that passing the Korean language class I have signed up for is my new third goal. It seemed really confusing in parts at first, but it’s starting to make sense already even after only two classes. The people really seem to appreciate you making the effort, even if it is only “hello”, “thank you”, and “goodbye”. I’m really looking forward to challenging myself to learning as much as I can to try and have a basic conversation with the locals that uses a bit more vocabulary than the basics.