The outdoor pool, and the perks of Southern California

Monday 21st was Presidents Day. This meant we had day off. Great, I thought. A chance to do some revision, go somewhere in the sunshine and basically relax. I should point out that I only knew it was Presidents Day due to the film Holiday Inn.

I had arranged to go swimming with a friend from dancing on Tuesday. I’m not allowed to wear my contacts in the swimming pool (I believe it’s to do with organisms that live in the chlorine water that can attach to the lens and eat away at eye or something) so I took my eyes out and put my glasses on. The sun had come out; leading me to think it would be nice to wear my prescription sunglasses for the first time in America. Ironically, the sunglasses then disappeared at some point. I asked as I left, I went back a couple of hours later; I went back the next day and also checked out the lost and found at the police department. More than anything else, I really hate losing things. Someone probably found them and thought they’d lucked in. Well, the joke is on them, as the glasses will be totally useless to them! Unless they have -7 and -6.5 eyes that is, which very few people do.

Now, as for the swimming, certain muscles aren’t what they were. Particularly the ones I use to swim. I hadn’t been swimming for almost 2 years, and it showed. All the cycling, running and walking in the interim had done nothing for my shoulders and stamina in my upper arm muscles. After some warming up, and tiring out for me, the competitiveness started. I heard my friend say “right, well let’s see how fast you can go. When you’re ready…” For the first 25 we were dead even. Neck and neck! Then she tumble turned and I turned against the wall. Big mistake! I spent the whole of the 2nd 25 with my head right at her feet, enjoying all the splashing of her feet. Once she hit the wall I sat up (figuratively speaking – basically stopped swimming) and coasted in to the wall. I maintain that if I’d have tumbled it would’ve been close. Next time we’ll see!

The pool is lovely! It is 50m x 25m, outside, and fully heated. It was freezing when we finally go out, but right next to the pool is a hot tub which is very hot and soothing to the aching muscles. The only problems that I can see are that backstroke’s right out, unless you have very tinted goggles that is, and if you turn to breathe towards the south, if you forget about the sun you sometimes have to suddenly scrunch up your eyes! Nobody seems at all shy about public nudity either here when in the changing rooms. I don’t care at all when I haven’t put my glasses back on/contacts back in, but when I have I don’t know where to look. I wouldn’t say I was uncomfortable with myself, but I wouldn’t just walk around with nothing on for the sake of it like most of them seem to do. The pool is so good though that I suppose we must take the rough with the smooth. I’m going to try to make swimming a twice-weekly thing for the rest of the year. I really enjoyed it. 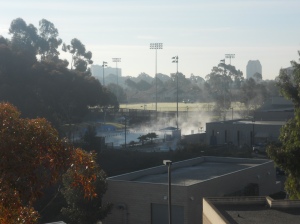 The lovely warm pool from our balcony at 7:15am

I made good with this claim I had a much better swim on Friday. I got at noon or 12:30pm, and every time I am surprised that it isn’t absolutely packed in the pool. There always seems to be a lane free to swim in. The lanes are nice and wide too. I did 1000m in 19:10, which isn’t bad. I went again today and got that down to 18:26, so I’m slowly improving back to my old form. Some kind sole had also handed in my sunglasses in today, so my faith has been restored in mankind!

Until last week I was completely ignorant of the Tuesday market on campus. Having now sampled what it has to offer, I shall say that although it was a tad pricey, there is no doubt that the food on offer was very good indeed! I had a Strawberries and crème crepe (“with real cream?” my mother asked. “Don’t be stupid, this is America!” I replied) which was $6, and the savoury ones were $9, not cheap. I now speak even more glowingly of the California crepes place in downtown SD which, besides having many delicious offerings, now looks very reasonable indeed!

I had a midterm on Thursday. I got a special mention in the class today for getting one of the top scores. I was shocked as some of the problems were a bit wacky, and he had to talk for the first 10 minutes explaining the questions. Not only was this off-putting because he wasn’t saying anything you couldn’t get from reading the problem, but I didn’t know whether to start, or listen, or what! I was totally out of exam frame of mind by the time he’d shut up! The last question I couldn’t have truly understood in a month of Sundays, yet I got full marks. Maybe it pays to know be friends with the TA?!?

The 2pm ballroom lesson on Friday was with Michael Kielbasa, who is quite a famous dancer in these parts. Because of this, I called in a favour from a friend and missed the Vibrations lecture. The lesson itself was superb, and I learnt a lot. As the social dancing hour wound down, I was talking to some people, and knowing just the right thing to say, they asked had I considered doing any acting? I smiled and said I hadn’t.

While we were sorting out rides for Synergy, a friend of one of the group we were in came up. As I said something she quickly asked if I was English? I replied in the affirmative, and she exclaimed “Oh, I always wanted to marry an Englishman!” We all burst out laughing, and being quick off the mark, I chirped “You don’t waste time do you!” It happens a lot out here…

There was also some excitement with a pair of dancing shoes someone had left behind. I had no idea as to the identity of the owner so I envisioned this becoming something like Cinderella. Would I have to go around every dancer and see if the slipper fits? Maybe an over active imagination… Denny’s is open 24hr, so we stopped there on the way back from dancing. It’s a proper American diner, and does good milkshakes if you like that sort of thing!

It snowed in the mountains in the distance last weekend. Yes, it was cold! 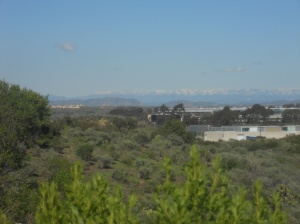