Cyber silence has been enforced over the last ten days or so due to restricted access to any form of internet that doesn’t involve waiting ten minutes for the page to load. However, internet shm-internet; when you have a glacier outside your window, a computer screen is not what you should be looking at.

Patagonia was the setting for this mini break, as we left behind the bustle of BA (and maybe a few university classes) to submerge ourselves in Argentina’s equivalent of the outback; endless stretches of nothing, apart from maybe a few sheep here and there. Regardless, there were not enough to tempt us to stray from an ‘edited highlights’ (or ‘how to travel at breakneck speed’) tour of the best the south has to offer. 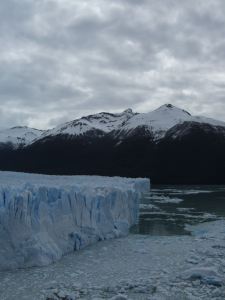 It helps puts into context the gigantic nature of my current country of residence that the flight to our first destination lasted more than three hours and still left us short of reaching the southern most point (known as el fin de mundo or the end of the world, due to its proximity to Antarctica). We were in El Calafate, home to the Perito Moreno glacier (the face of all good Argentinean Lonely Planet guides) and not a lot else. Like nearby town El Chaltén, prime spot for some mountain trekking, these towns are functional by nature, so much so that the buildings seem to have been vomited onto the landscape without forethought or any sense of grounding in their surroundings. As much as you appreciate the beauty of the landscape they inhabit, a couple of days in each are sufficient to leave you wondering at the lives of their residents.

For the rest of the time, however, especially when a 97 square mile glacier is involved (and you’re stood on it) your mind is elsewhere. The mountains around El Chaltén were beautiful but trekking across the glacier was a surreal and unique experience, particularly as looking back on the pictures we appear to be superimposed onto to some dreamt-up background. Patagonia trips, from the amount of miles you have to cover to the tours, are far from cheap but this was something that was worth that little bit extra as, obviously it goes without saying, ice trekking on a glacier comes highly recommended.

We headed next to Bariloche, located in the middle of the unfortunately slightly soggy Argentinean Lake District. Just like our own Beatrix Potter-ised version, lake districts in the rain are not the best places to be, so after seeking out another (black) glacier, visiting a hippy town and renting a car for not much more reason than to escape the precipitation (slightly exhilarating experience when you’re driving on the wrong side of the road for the first time, knowing that the owners of the car are holding your credit card hostage) we cut that stage a day or so short, moving on to our last leg, Puerto Madryn.

This town is sealife central; you’ve got your penguins (1), your seals (2), your dolphins (3), different whale species depending on the season and a few sheep thrown in for good measure. There is also a lot of mileage involved. Tour day one, that took in exhibits one, two and three, was a good twelve hours with a high percentage of them in a bus, all of which bizarrely ended on slightly overpriced Welsh cake, in a town that was, as you guessed, Welsh (Argentina: built on immigration). Nothing could come close to the whale watching though, especially when you get bumped up to sitting with the captain once you find yourself on a boat purely manned by slightly queasy looking school children. Particularly useful as he knows the exact moment that the whales are about to get their tails out, helping you to capture that perfectly clichéd whale-watching photo. Alas, even with assistance, my photography skills didn’t amount to much.

The weary travellers returned to the city just in time for Halloween shenanigans, including trying to explain to the world at large what exactly a one of the other Brits was trying to achieve with her ‘chav’ costume.

Only three weeks of classes now until finals. Panic is rearing its head!