It’s 11pm on the 31st May and I’m anxiously expecting the hours of delays at London Heathrow to stop me from catching my changeover at Athens. After packing days in advance and arriving with hours to spare at the airport, it would be just my luck to end up starting my trip stuck in the Greek capital on my first journey out of the country alone. BUT! With some surprising good fortune and planning by the Athens staff, a quick 15-minute sprint across the airport gets me onto my flight (just barely) and within the hour I am stepping out into the dry 30oC heat of Pythagorio, Samos island; just two kilometres from the Turkish coast, but home of the Greek philosopher the town takes its name from, Pythagoras.

So, what am I doing 2000 miles away from home on an unfamiliar island? Well, apart from wishing I’d known a little bit more Greek before leaving and praying to the powers that be that I won’t be my usual awkward self by talking and actually making some friends, I am hoping to use the degree I am studying for by helping to conserve the islands local wildlife. Samos is in many ways unique. Not only does it host the only island population of golden jackals in Europe, the last remaining common chameleon population in Greece, and (along with a number of the Aegean islands) have a vastly under-studied insect biodiversity, but it is also home to three species of whale, four species of dolphin and the critically endangered Mediterranean monk seal. A seemingly ideal place for a wannabe conservation biologist to begin his journey.

Now, fast forward to the present day and, sitting in the colder, rainier British weather, I can say two things. Firstly, I managed to improve/ succeed with all three of those hopes, wishes and worries and secondly, I miss it already. While admittedly the extent of my Greek linguistics is still limited to little more than καλημερα, καλησπερα, καληνυχτα (good morning, good evening, good night), I did manage to best my social ineptness and make far more friends than I could have possibly expected to – many of whom will almost certainly be lifelong. Not only that, but I managed to do so while setting up a project studying the insect populations across not just one, but two islands. I learnt not only to work with people that were entirely different to me (and yet had such similar ideals and aspirations), but also to lead, and to manage myself, my time and my life. I discovered that when you’re not stuck in a dreary Edinburgh basement washing dishes, but instead working on something you love, with people you love, a job can feel like more than just a never-ending holiday, but a dream come true.

If you’d like to hear more about my trip I have my own little blog right here! 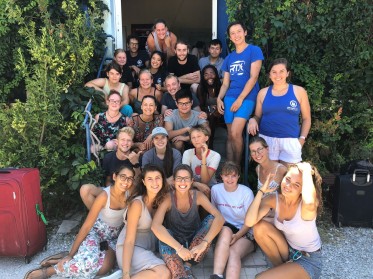