The New Zealand Way: An exploration into the veterinary profession to discover the secret of efficiency in farming practices

New Zealand – a country famous for adrenaline filled adventure, striking beauty and agriculture. Quoted in multiple guidebooks as the world’s largest farm there is no surprise that a large proportion of the land in New Zealand is dedicated to agriculture practices particularly dairy. Within the two main islands the country is amazingly efficient with 95% of the produce made in New Zealand exported worldwide. The UK agriculture sector fails to be self-sufficient in this way with New Zealand produce making up some of the shortfall commonly lining the shelves of the supermarket. With such excellent efficiency however there will always be sick stock that require veterinary attention. With a keen interest in maximising efficiency in farming practices through veterinary intervention I have spent six weeks this summer (during the NZ winter) travelling throughout New Zealand working in veterinary practices in North Otago and South Canterbury travelling the length of the Canterbury Plains. 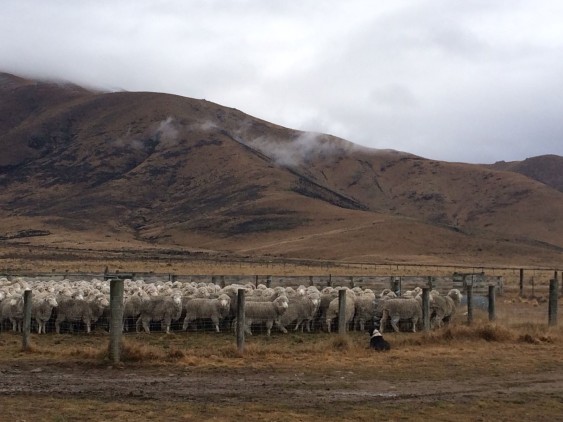 Landing in Christchurch I was welcomed like a resident with everyone being overwhelmingly helpful. It was something everyone had to say about the country was that you would never feel alone and everyone is there to point you in the correct direction. So I was pointed in the direction of the next bus heading south to Oamaru – my first stop. Within minutes a vet truck pulled up and I instantly felt welcome. This country on the other side of familiarity began to feel like home. Arriving in the clinic I was thrown into a truck to start my day as a vet. Multiple things struck me as I worked on a series of dairy farms. Every farm was a carbon copy of the one before with variable numbers of cows and minimally staffed. Each cow would be classed as small in a UK dairy yet each farm would average 750 milking cows. The biggest surprise of the whole experience however was how well each farm used what it had. Here in the UK it is a race between farms to find the new gizmo to maximise efficiency with the top producing farms now keeping the majority of their cows indoors all year round. Within NZ each farm would have a set timetable that would be very similar to the farm next over. August being the calving season that effectively matches a cows lactation curve to match that of grass growth in the paddock to maximise milk production. This opened my eyes to an alternative method of production one that takes it more back to basics.

New Zealand – showing the world the best way to be efficient isn’t the newest gadget rather it is to maximise what you have when you have it.