I was fortunate enough to travel to Puerto Rico, and saw the devastating effects that last year’s hurricane season has had on the residents of the island. I spent three weeks with the American charity All Hands and Hearts up on the flat, concrete roofs of local resident’s homes. Amongst a team of volunteers we were scraping off debris left by the hurricane, power hosing old layers of sealant and muck then repairing cracks with concrete, and covering the whole roof in high quality silicone sealant.

The trip was life-defining. As an Architecture Masters student, it is the first time I have done something and genuinely felt that this is the exact kind of thing I would like to get involved in when I graduate. I was keen to volunteer with All Hands partially to discover whether there is room for an architect within this kind of organisation, and everything I experienced during the trip, convinced me that there is. I am excited for the future.

This was a house down the road from the All Hands base. Everyone takes great pride in painting their houses bright colours, but the damage from an intense storm season last year is evident, only last week was the power restored across the whole island.

Every morning each team packed up their vehicle with the tools needed for the day, and headed off to sites around the local area. 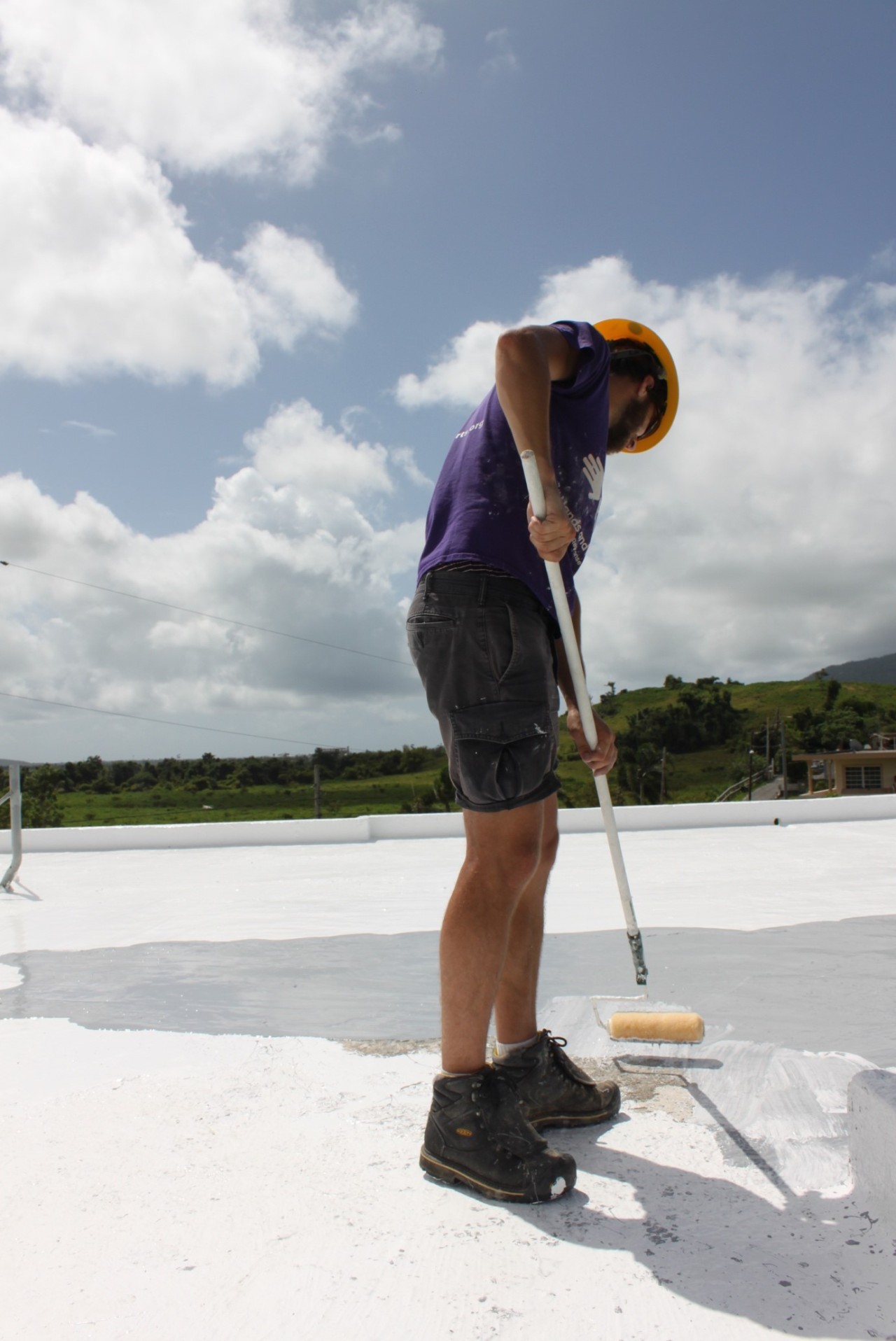 We painted a thin layer of silicone sealant on each roof to seal the homes, which should withstand years of intense sunlight and future storms. 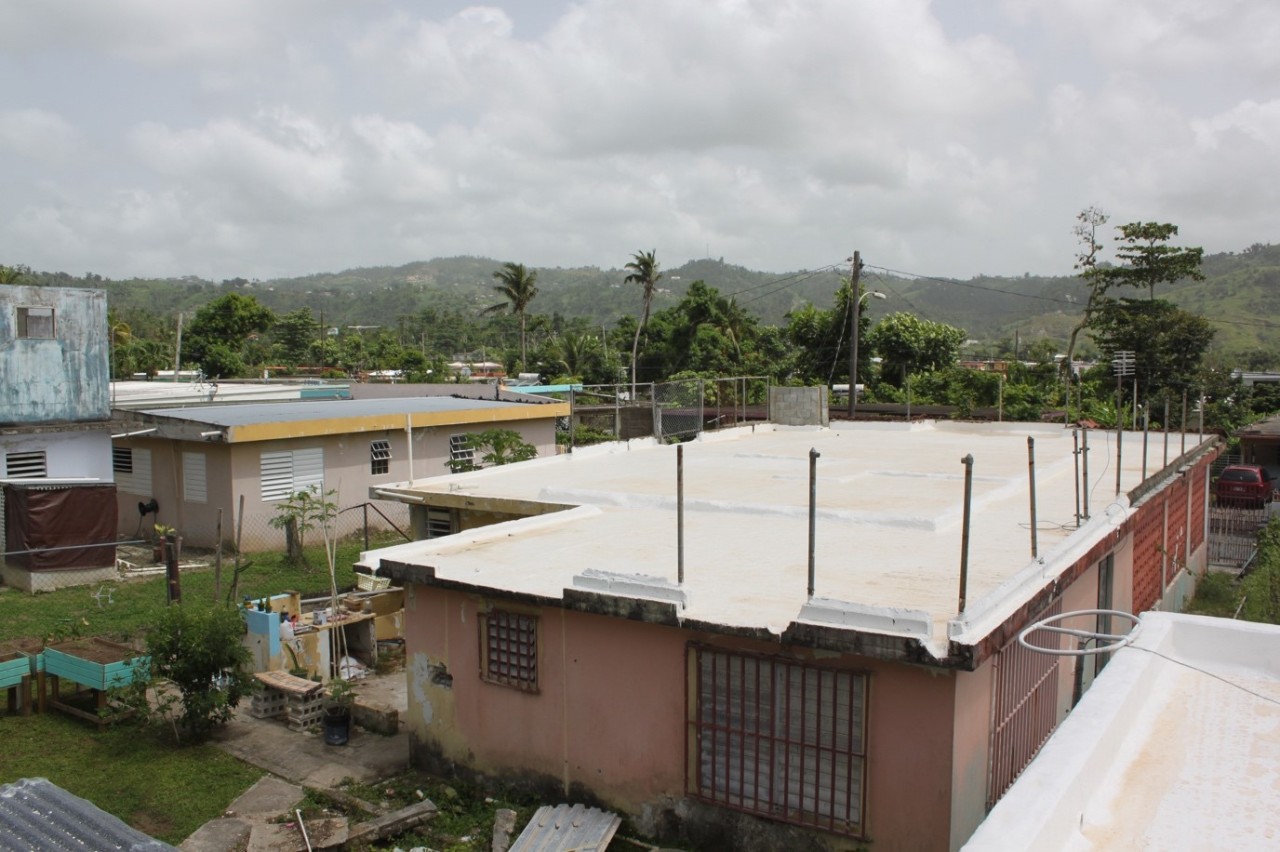 A view over a couple of the roofs All Hands has sealed. So far they have completed 200 out of 1000 homes on their list, which was drawn up in January of this year.

One of the roofs we worked on, mid-completion. Each roof took between 2 – 5 working days to seal. 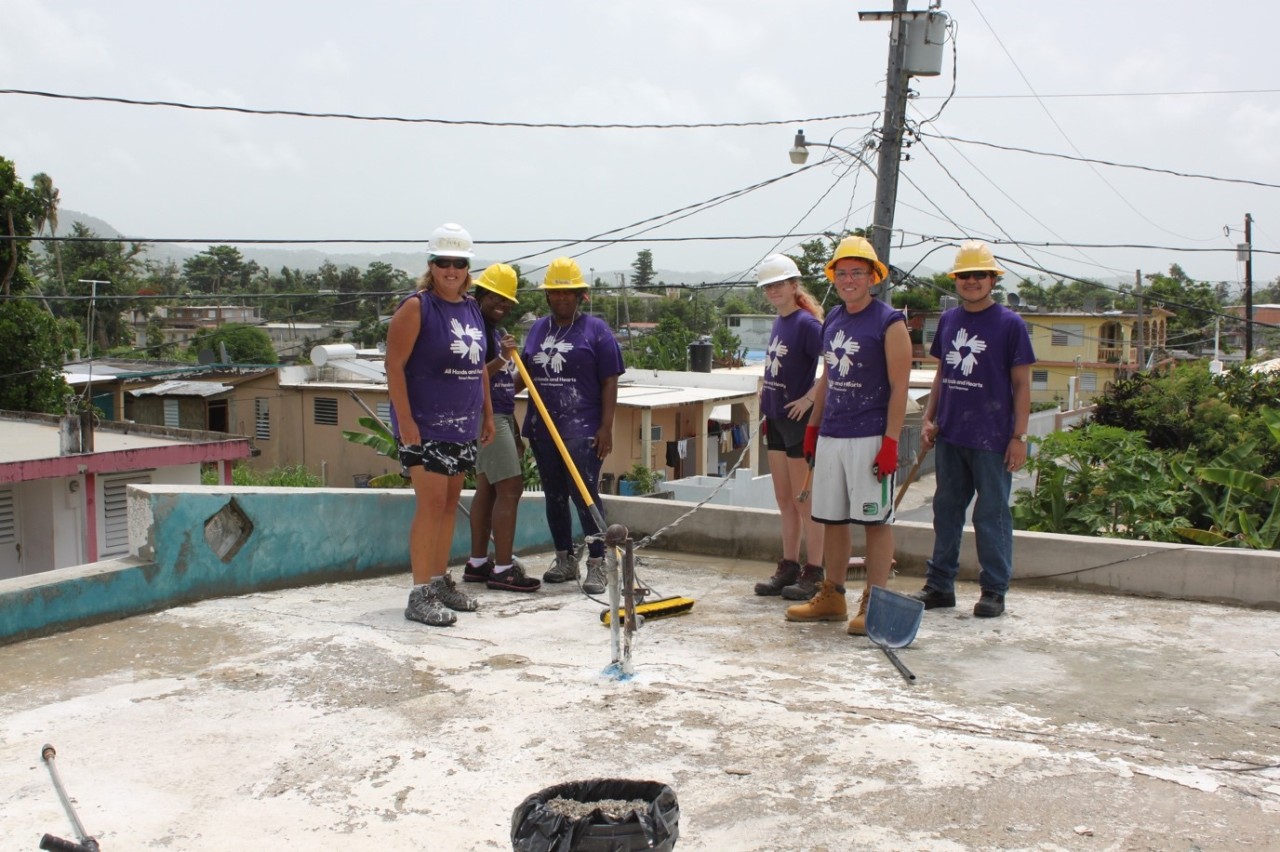 One of the teams I worked with up on a roof. There were volunteers of all ages from around the world.

Once the roof had been sealed, it was time for the “sanitation” team to go inside the home to remove mold which had built up as a result of the houses leaking for almost a year. 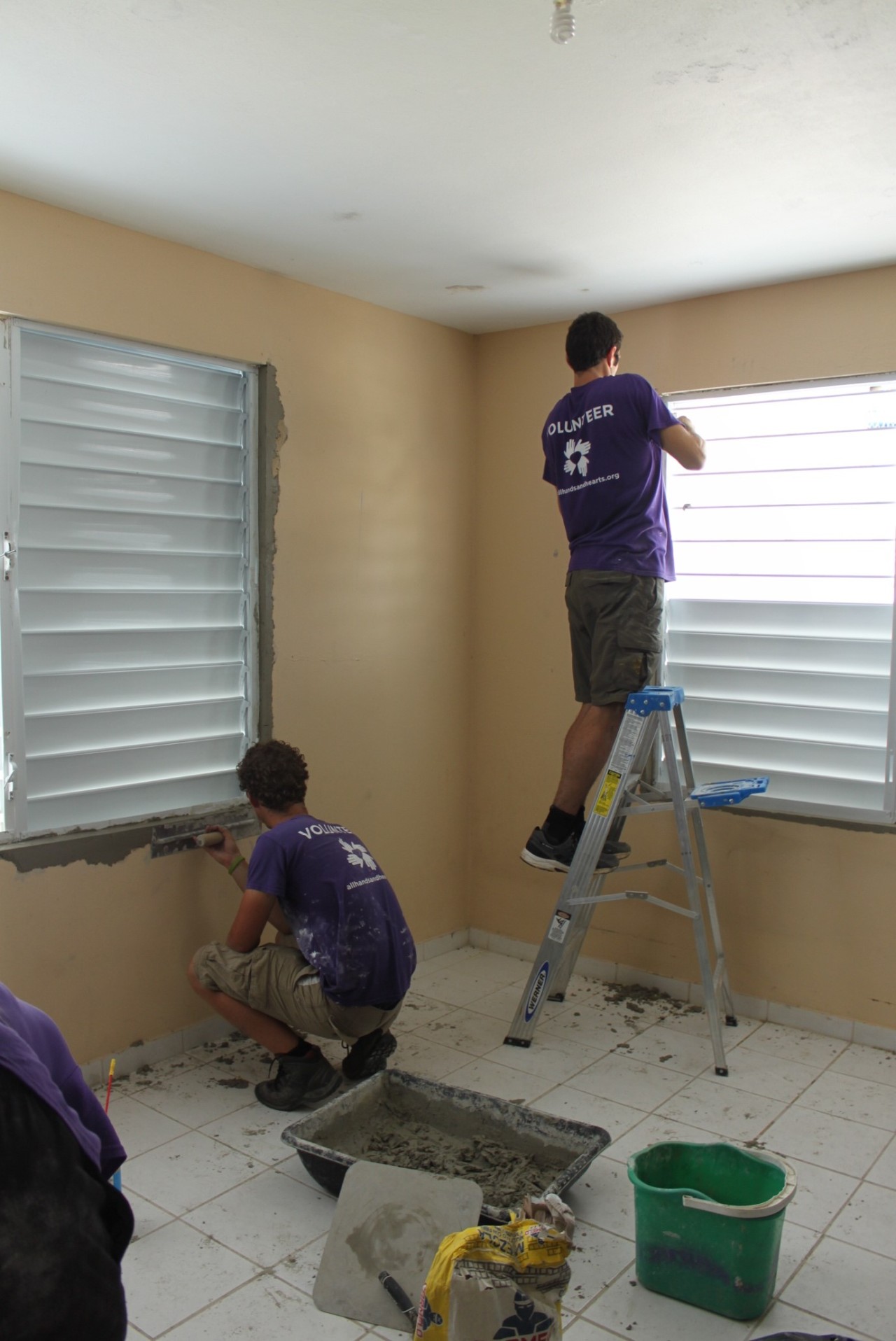 The final scope of work was to remove any damaged external doors and windows, replacing them with new, hurricane proof metal louvres/ doors, and repairing concrete work to the walls. 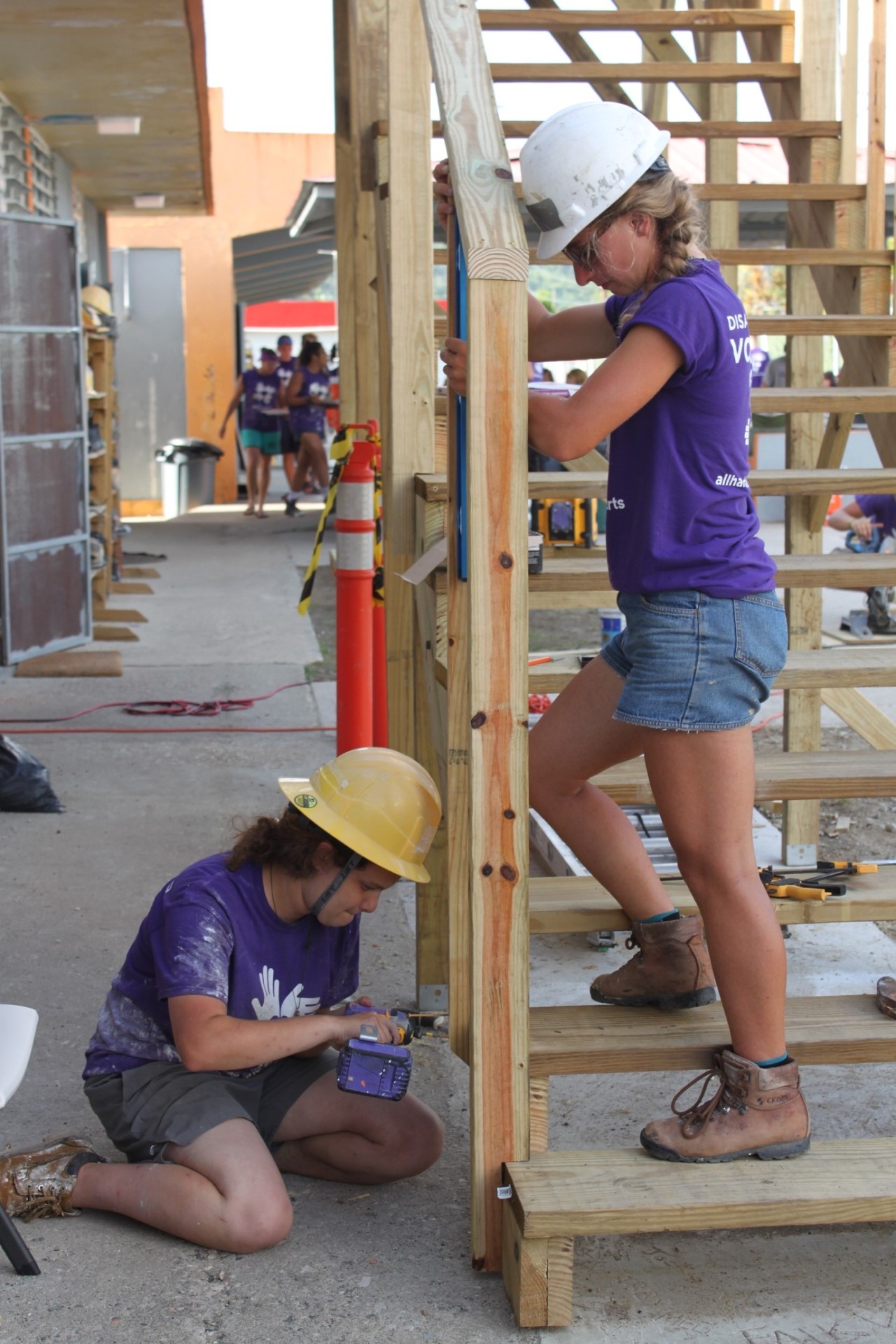 There was such an overwhelming sense of community on the All Hands base, everyone is empowered to push themselves and achieve great things by working together. This is myself and another girl building a timber staircase. 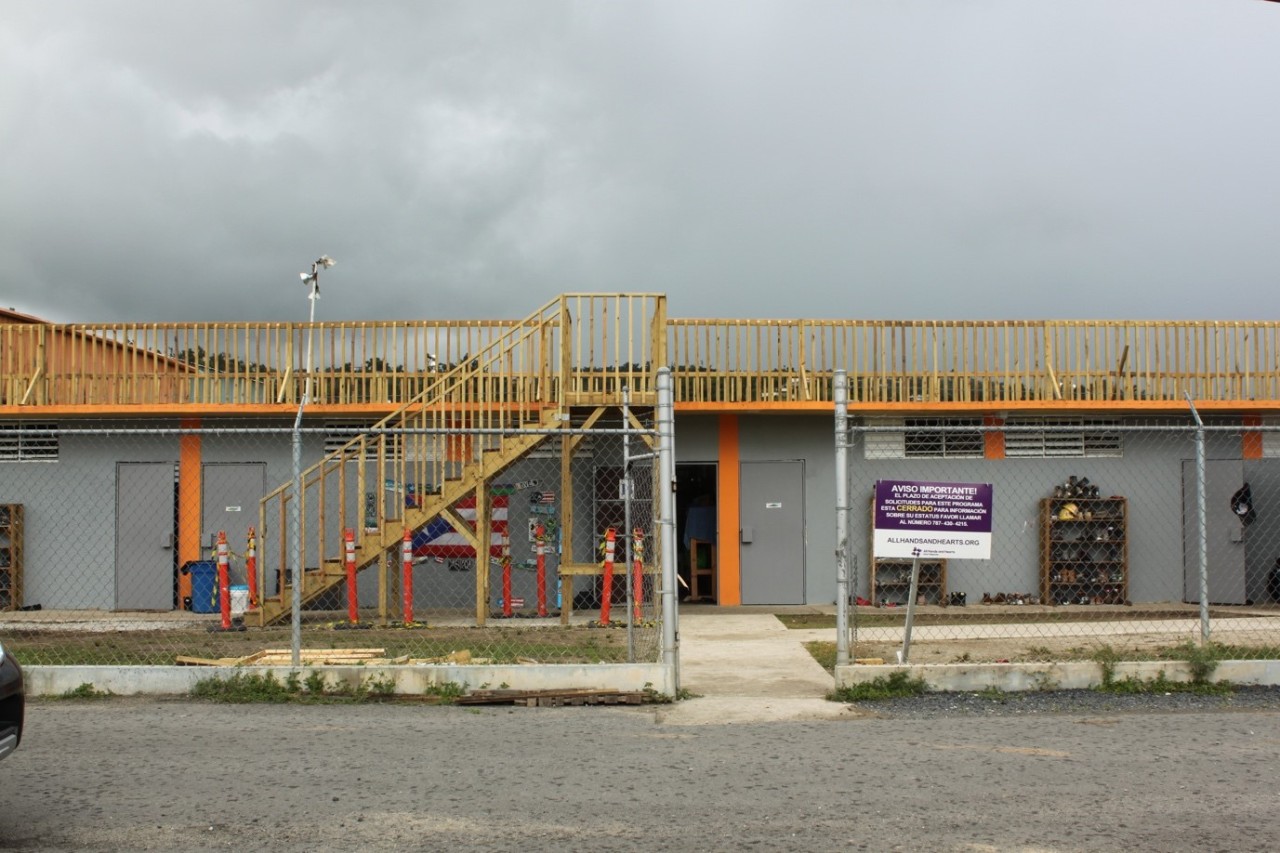 Halfway through my time in Puerto Rico I was asked to lead a team constructing a staircase and railings to enable the use of the roof above the dorm rooms on base, to act as a new, communal space, meaning more room for more volunteers.

I learnt more than I could ever say in this photo blog during my time in Puerto Rico, but one of my new skills is using a chop saw.

The surrounding scenery was stunning, Puerto Rico is such a beautiful, welcoming, warm, green country, and I am grateful that I was able to play a small role in the process of helping the people to achieve a sense of normality again after hurricane Maria.