My First Semester at UConn – USA

It was a year ago I decided to apply for a year abroad – almost right before the deadline. It is surreal to think that my first semester at The University of Connecticut is almost over. Looking back, I have managed to fit in a lot. From going to my first tailgate and American football game, to going on a weekend hike along part of the Appalachian Trail and camping when it was -8 °C, it has been a semester to remember. 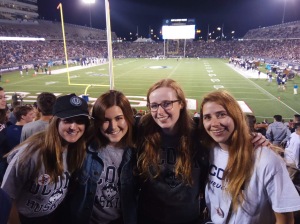 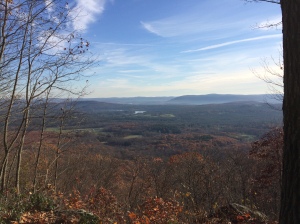 The view from our camp: along the Bear Mountain stretch of the Appalachian Trail.

The unusual thing about UConn is that its main campus, Storrs, is literally in the middle of nowhere. When you drive out of campus, you see more trees that you could imagine! A common way to travel out of campus is to hire a car from a small town nearby. With a group of friends, I have been on weekend trips to Cape Cod in Massachusetts, Newport in Rhode Island, Vermont and New Hampshire. We made sure to get these trips in near the start of the semester, when the temperatures are still decent at 25-30 °C and when deadlines weren’t as much of an issue. I’ve also spent weekends doing outdoor rock climbing and watching UConn sports teams like American football, soccer, ice hockey and their internationally recognised women’s basketball team. 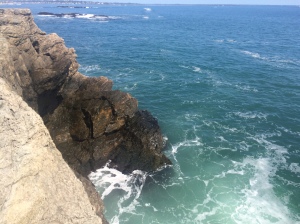 A cliff walk trail near Newport.

Especially from attending all the sports games, it is apparent that there is an incredible amount of school spirit at UConn and students seem really proud to be studying here. The atmosphere at games is the best I’ve experienced – it beats the Edinburgh vs St Andrews varsity rugby matches any day. What is also striking is the number of people that wear UConn apparel. You could pick someone random walking around campus and they would be wearing or carrying at least one UConn branded item. The Bookstore, where they sell the apparel, has a vast range of UConn items you can buy. From hand sanitizer, to a chopping board, to a bandana for your dog, you can buy anything that you want.

For Thanksgiving Break I spent the week in Stamford, which is an hour train ride from New York. I hadn’t been to NYC before so we spent a few days in the city, covering the typical tourist attractions like walking the High Line and the Brooklyn Bridge, visited the 9/11 memorials and took the Staten Island ferry to see the Statue of Liberty. We wandered around Central Park and found the first statue of Robert Burns outside of Scotland, so that was a nice reminder of home. One of the highlights was going to see Chicago on Broadway – another was going to a Canadian family’s Thanksgiving dinner. There was seven of us at the dinner, yet there was enough food for at least three times as many people. It was my first taste of deep fried turkey – as a Scot it’s unusual that I hadn’t tried it before. 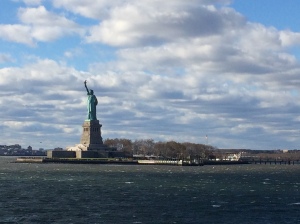 The Statue of Liberty.

I am already making plans for next semester. A trip to Boston is definitely on the cards. For Spring Break, we are thinking of going to Louisiana and visiting New Orleans.

I’m not going to lie, I do miss life in Edinburgh. There are times when all I want is some home-cooked food or a glass of Irn Bru. There are times when I miss my friends and being able to make a last-minute rendezvous to Hive. Even so, my time so far in Storrs has been such an incredible experience. The opportunity to study in the USA was far too good to pass up, and I’m so glad that I’m here.