I can’t believe I’ve now been in the US for almost two months. As I wrote my last post I was eagerly anticipating visiting the White House (see below photographic evidence of my adventure to DC):

Fulfilling all of my West Wing-inspired dreams (and getting sunburnt…)

So far studying abroad has been everything I had hoped it would be. Of course, there have been moments of culture shock (midterm season just ended. Exams?! We only just got here!) and homesickness, but the pros have far outweighed the cons. The most exciting news I have is that I’ve been lucky enough to secure a job as an undergrad research assistant in UVA’s history department, meaning I get to look at things like this for fun:

John Hartwell Cocke’s diary, c. 1858. This is extremely cool, take my word for it!

On a different note, college sport is HUGE here. Home football games are an all-day event, and so far I’ve been to ice hockey, soccer, volleyball and (American) football games to name just a few. Our football team isn’t very good, but apparently next semester we’ll redeem ourselves during basketball season (last year we were national champions!). 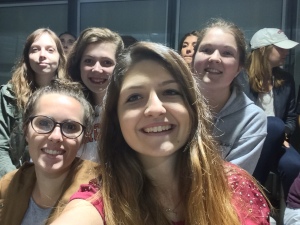 The now-infamous ‘Sad Virginia Fan’ meme, taken during our ‘almost victory’ against Notre Dame in football a few weeks ago…

One massive perk of long (17 week) semesters is you get holidays half-way through them! ‘Fall Break’ is officially described as ‘reading days’, (sort of like Innovative Learning Week at Edinburgh…) but most people take off somewhere for a few days. UVA exchange students ended up in New York, Chicago, Williamsburg and as far south as Tennessee, and I was in Boston, which was amazing. It’s such a cool city, and brimming with historic sites to explore.

Boston from the top of the Bunker Hill Memorial.

For Thanksgiving I’m going to DC and Philadelphia with one of the other exchange students, which I’m counting down to already!

Okay, perhaps I should stop procrastinating and do some work, so I’m going to finish off with a few more pictures.

Thanks for reading and ‘Wahoowa’!

UVA from ‘the lawn’. Jefferson had good taste in architecture!

Monticello! Otherwise known as ‘the house on the back of the nickel’. 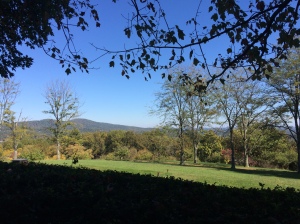