Tomorrow is the day when the university officially starts and I think this is a very good chance to round up the last week before the beginning of lectures.

German Department’s Welcoming Week
German department offers a Welcoming Week for International Students which sounds very nice, however, you have to pay for it and naturally a question comes up whether it’s actually worth it. As a person who took part in it I can honestly say that I’m not entirely sure whether it was worth the exact amount of euros I paid, but it was undoubtedly useful. The main problem with it is that the international students who come to the courses which are organised as part of the Welcoming Week have a very different level of German. There are students who have studied it for one or two years and there are those who studied it at school, have an undergraduate degree in German and are entering into Masters program… I’ve studied German for two years and had no prior knowledge of it before the university, thus I found some activities in the welcoming week quite challenging. However, I must say that the people who were leading it were very understanding and helpful. I believe this week took away a bit of stress from the upcoming few weeks since it got us acquainted with the way the university works in Germany and what will be expected of us.

The welcoming week mostly consists of three type of activities:
1) Cultural. We had some nice short tours organised for us, i.e. to the Münster which was lead by one of the lecturers in the Mediävistik part of German department. There was also a trip to cinema, pub crawl and some other things.
2) Academic. We had three long Übung/Seminare on Referat, Wissenschaftliche Hausarbeit and Protokoll/Essay which were lead by representatives of three German sub-departments (Linguistik, Mediävistik and Neuere Literatur). All of them were crammed full with useful information and also had some practical activities. For example, doing a short text analysis or writing a summary of first part of seminar with a group of people and then presenting it before the class.
3) Choosing the courses. There were a few hours dedicated for Studienberatung (if you need any advice or information about the courses you want to take) and later on we were registered for the courses by our Fachkoordinator.

Registering for courses
There are a few things which you need to know about that.

1) You need to register for Sprachlerinstitut German courses for Erasmus students yourself. You can do that online (just click Anmeldung on the course page in the Vorlesungsverzeichnis).
2) Evaluate your abilities and know how much ECTS you need. You can take a few extra courses and then drop them later on, but that is not encouraged since it takes up a place which other students could have used and ends up in lots of bureaucracy. On the other hand, you can’t  simply change the course to a different one once you have started with it.
3) If you are not taking part in the German Welcoming Week. If you are taking courses in the German department, you will still have to register for them with your Fachkoordinator. In that case I would strongly advise to contact him/her and do that before the German Welcoming Week, because it’s almost impossible to do that during it for those who are not taking part in it. Of course, you can just find out when the registration event is and just show up.
4) Different departments have different ways you get registered for a course. If you are interested in studying something which does not belong to the German department you should contact the Fachkoordinator in that department yourself since the German one won’t be able to register you for the courses from a different department.

And just one more useful thing to add this topic. Some of the course descriptions in the Vorlesungsverzeichnis have an amount of ECTS indicated. As international students we have to multiply the amount of ECTS by 1.5 to know the amount we will be getting. If there is nothing indicated a good rule of thumb is that we get 9 ECTS for Proseminar and Vorlegung mit Begleitseminar and 3 ECTS for Vorlesung (though obviously there are some exceptions).

Just to finish this post, I’m going to show you a few pictures from one of the University Buildings (KG I). 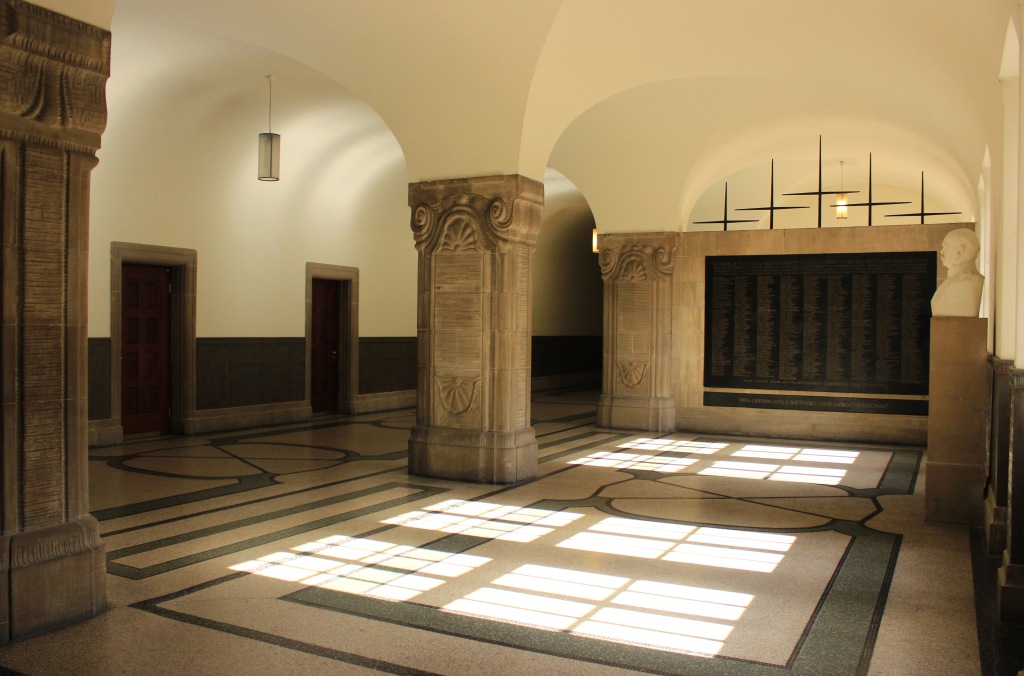