The Rhône on a sunny day.

Somehow a month and a half has passed since I last blogged, and I’m well aware this is due a bumper update, so I’ll pick up where I last left off. The end of October brought the equivalent of the French half term, the Vacances de la Toussaint, during which almost every single person I’d met here collectively migrated either home or to Barcelona for a week. Due to lack of planning and lack of funds (handy student tip: just because you inexplicably got your loan at the start of August, doesn’t mean you should spend it all before actually beginning uni), I remained in Lyon. Thankfully, one of my friends stayed too, and we did some exploring together, with particular highlights being the Musée Minature et Cinéma (gorillas from Planet of the Apes next to miniscule soldiers carved on the ends of matchsticks), and the Croix Rousse district. Were I to live in Lyon in later life, I would undoubtedly reside here – the area sits on a steep hill above the rest of the city and feels distinctly less touristy and markedly cooler and more bohemian. On the day we visited, the plateau de la Croix Rousse was hosting a fun fair. One of the major contrasts I noted was that all the prizes up for grabs were considerably classier and more expensive than those at British fairs. Instead of oversized teddy bears and tweety birds, almost all the stalls offered iPads, iPhones, Mac Books or PlayStations. In the name of exploring these cultural differences further (and also because there were loads of kids going on it), we thought it would be a safe idea to try out the Haunted House ride. Ensconced in our little car, we meandered steadily through the darkness, dutifully screaming as electronic manikins jerked to life – so far, so tame. However, as we snaked round one of the final bends, a masked man jumped out behind us brandishing a chainsaw, which he revved with great enthusiasm next to and around our heads. Marching behind us, he eventually put the chainsaw down, only to proceed to tickle us on the shoulders and neck for quite some time until the car trundled on – the whole procedure was half traumatic and half hilarious, and would have been entirely illegal in the UK.

Amusing graffiti – the translation reads “pedestrians, take the pavement”, with the last word crossed out and replaced by “power!”

At the end of the half term, I visited an Edinburgh friend in Paris for the weekend. She lives in ‘the Territory’, described in a New York Times article as “a youth hostel, an art studio, a submarine, a dreamscape, a favela, a firetrap, a serial-killer lair and Willy Wonka’s chocolate factory”. As with most things Parisian, it is of course somewhat over romanticised, but nevertheless, I did have to carry a portfolio with me whenever I entered and exited (to keep up the art studio pretence), and instead of a doorbell, there was a strange walkie-talkie and CCTV access system. Rather than sheltering impoverished artists, the Territory seems to largely shelter impoverished European students, one of whom happened to have lived with one of my old school friends during his second year of uni (proof that the community of British expats in France is miniscule). However, while the NYT article idealises the spirit of the Territory, it does do justice to the interior – a maze of corridors and staircases and walls-that-are-in-fact-doors, occasionally interspersed with squat TVs showing grainy images of the outside world. 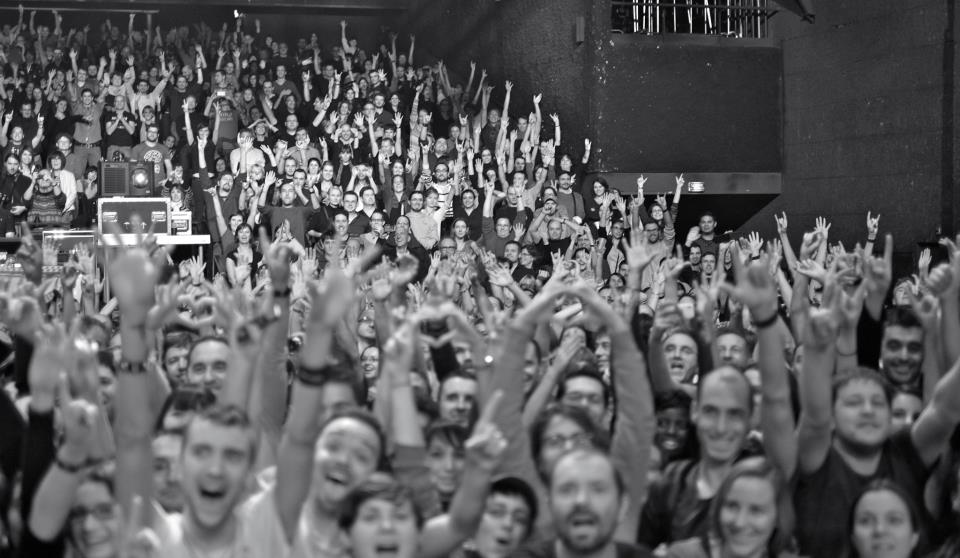 Try to spot me – Garbage at the Transbordeur.

The beginning of my year abroad was, until recently, lacking in two life staples: live music, and British comfort food. In the past month both these absences have been rectified, the former thanks to the xx, Garbage (twice) and the Black Keys, and the latter thanks to what is technically a mere shop, but can be more accurately referred to as a gastronomic sanctuary for displaced Brits. At home, I would have balked at the thought of exchanging €1.40 for a can of Heinz baked beans, but out here, that price feels like little to pay in return for their sugary, tomatoey goodness. The shop, Little Britain, sells a variety of such goods, from the exciting and longed for (cheddar cheese! Tetleys!), to the slightly less missed (haggis, black pudding), the very American (hellooo, Jack Daniel’s BBQ sauce), and the heartening (poppies, at the start of November). This discovery, combined with multiple viewings of Skyfall and the aforementioned gigs, has been instrumental in warding off homesickness. The xx hail from my corner of West London, whilst Shirley Manson of Garbage is a native of Edinburgh, and seeing them both reminded me that the channel is not really so wide after all. Last week, killing time in Paris while waiting for a friend to get off work before one of the Garbage dates, I visited Gals Rock, a compact boutique nestled innocuously in the north of the city and dedicated solely to female and feminist rock culture. This is, essentially, me in shop form, and I highly recommend a visit for their selection of records, books and zines, clothes and accessories, and if your timing is lucky, talks or sets. Much as I do like Lyon, browsing in Gals Rock really hammered home the fact that only bigger cities can properly cater to the more niche of interests. (Also just to plug some other writing I’ve done that’s vaguely connected to this update – a few weeks ago I interviewed Jennifer Herrema of Royal Trux fame for the BEAT, which you can read here, and I also wrote about why Lyon is actually a good alternative to Paris for a weekend break for Retrospect here).

I haven’t yet mentioned university in this post and that’s largely because I still haven’t done a single piece of written, assessed work yet. Outside of attending my 12 hours of lectures a week, I genuinely don’t seem to be expected to do anything academic. For a week in November, life at Sciences Po was quite disrupted by the Bureau des Etudiants (the equivalent of the student association) elections. At Edinburgh, election time usually consists of most students fastidiously avoiding any candidates for fear of long speeches about their policies and bright flyers promising the undeliverable. In France, they circumvent any disengagement in student politics with all out bribery. The vying groups of nominees threw themselves into hosting a week long party in the main atrium – music blasted throughout the day, popcorn and candy floss machines appeared, chocolate fountains sprung up next to video games and sofas, and at lunch time, free food was proffered to all. The candidates would also show up during lectures, to only slight exasperation from the professors, to give out sweets and drinks while dancing to Eurotrash (see video below).

Back on the academic side of things, while I partially regret my decision to study exclusively French history and politics (seriously, I am so done with Charles de Gaulle), it is interesting to live in a country where the vast majority of street and place names have historical significance. While doing some reading for my year abroad history essay on the resistance to the German occupation of France during World War II, unknown names kept ringing tiny bells in the back of my head. For example, my road is named after French historian and Resistance fighter Marc Bloch, and the airport I flew into when I moved here, Saint-Exupery, takes its moniker from the Free French Air Force pilot who also wrote Le Petit Prince. I’m going to finish this post with an excerpt from a book about the Resistance, which details Churchill’s meeting at a chateau with the French government, during which he tried to persuade them to join forces with the British instead of signing the armistice. The following is so fantastically French that I had to share. The telephone lines in the village “worked only when the village operator was on duty – she finished work at 6pm and took a two-hour lunch-break. As a result, the meeting was effectively isolated from the outside world and from the terrible events taking place where the Germans were advancing.”