The hills are alive, with the sound of tourists.

What do you do when you find yourself facing a long weekend on ERASMUS, courtesy of Austria’s love of national holidays? Some might wisely spend their time catching up on all the semester’s missed lectures. Or more realistically, will set their sights on a weekend bender with 72 hour Ubahn services, and an excuse to wear their dirndl/lederhosen fresh from Oktoberfest. But for myself, and very few others, it was finally time to live out a life-long dream; ‘The Sound of Music’ tour (I wish I was joking).

Preparing for the trip to Salzburg the night before included more than just packing for the temperamental autumn weather; I knew that if I was going to make the most of it, a bit of research was necessary. I didn’t want to overlook a scenic lake or church steeple that had movie significance. So after spending near enough three hours closely watching Maria sing her way into the frosty heart of Captain Von Trapp, you can imagine my excitement when it was announced that the evening activity of the hostel we were staying at in Salzburg involved watching a certain singing nun. Twenty-four hours into the trip and I had already seen the film twice; I was well on track to becoming a fanatic. The kind of fan that, as the tour guide the next day informed us, appeared at least once a year wearing a ‘Sound of Music’ t-shirt and crying hysterically whenever they saw a mountain, or someone tried to tell them the real story of the Von Trapps (Maria had an attitude problem and didn’t even love the Captain; way to spoil the dream).

On the first day, we had sensibly retired to the hostel dorm after the Von Trapps had climbed every mountain, knowing that the next day’s 9am tour on a hangover would involve a substantially less amount of twirling and yodelling. The tour of the film locations largely involved four hours of singing on the bus to the soundtrack, and I imagine many people picked the earlier start to avoid annoying fans such as myself. However, with provision of a bar at 10am (it’s five o’clock somewhere), I found myself completely comfortable belting out every word to Do Re Mi.

A highlight of the trip included a visit to the famous gazebo where, as any keen fan will recognise, ‘16 going on 17’ was filmed. Disappointingly, you can’t go in to the actual gazebo, due to an 80 year old woman in previous years attempting to recreate the famous dance on the benches, and falling and breaking a hip. 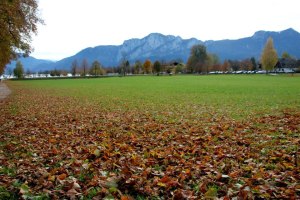 The tour exceeded my expectations; taking us to the outskirts of Salzburg into the hills that were (nearly) untouched by tourism and characterised by breath taking lakes and scenery, we visited an Austrian village Mondsee (meaning ‘moon lake’) which is host to the amazing cathedral where the wedding was filmed. It’s in this village that you can enjoy an exceptional slice of apple strudel that, although the restaurant is probably only ever filled with bus-loads of musical fans, is still part of an authentic Austrian town complete with wooden houses and lederhosen-clad locals.

Salzburg’s population is just under 150,000, but astonishingly is host to 300,000 tourists per year. Nearly three-quarters of these tourists claim the main reason to travel there is solely because of ‘The Sound of Music’. This weekend I counted myself as one of them. And I’m not even sorry.