A Girl Walking over a Swamp 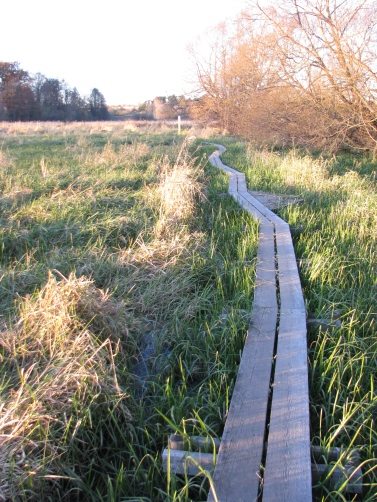 This weekend sun has flooded Uppsala. I got sunburnt. In Northern Europe. In late October. It was the very first time I got a little excited over getting sunburnt.

The windlessness brought a promise of a warm day to the town. Despite having planned to spend Sunday in bed working (sounds like an oxymoron, doesn’t it?), I got up, put on as many layers of clothing as possible, put a camera and a bottle of water in my bag and ventured out.

I took the bus to south Uppsala to go for a walk alongside the lake. The bus driver proved to be a typical nice Swede by appreciatively saying: ‘Wow, what a sprint. You didn’t have to run, I’d have waited for you.’ All in Swedish, of course. My listening comprehension skills are undoubtedly improving.

After a little over half an hour, we reached the final stop: Skarholmen, which is where a city girl’s venture into the nature began (I was tempted to use the term wilderness, but to be honest, even the term nature might be an exaggeration). I went down to the lake to take a few pictures of the sun mirroring in the crystal clear blue water. Then I decided to follow the path in the forest alongside the lake and when I reached the end it felt like a sin to get on the bus and go back. Instead I decided to walk a bit more in the nearby forest/park Sunnerstastugan.

Although determined to experience at least a little bit of the Swedish obsession and fascination with nature, I would not leave the main path. The sun shining through the tree branches was beautiful; I was not even cold. Nonetheless, getting lost in a forest would not correspond with my understanding of a lovely day. I have decided to keep walking and find a wooden footbridge Linné had had made over a swamp.

The forest was a tranquil place. I was standing by another lake, and only words sounding strangely familiarly kept interrupting the flow of my thoughts. It was a mother talking to her children in Polish. Suddenly, there I was, a Czech girl, talking in Swedish to a Polish family about the similarity of our mother tongues. I have not realised the comicality of the situation until I had left them far behind and continued in my search for Linné’s legacy.

Finally, I found it and I must admit that walking just a few centimetres above a swamp was great fun. It made me feel almost like walking on water. There was white frost on the wooden footbridge. The water underneath was frozen. And everything was suffused by the sun.

Having said that, knowing that my previous posts were getting progressively longer and perhaps too long, I am going to make a dot here and leave you wondering for a while longer about the gasque I went to on Saturday.