Naturally, when preparing to move away, I pored desperately over every third year abroad blog I could find. My conclusions were that there seemed to be a recurring theme of the culture shock that comes with living in a foreign country. Well, I’m about to add to this mass of warnings.

Imagining myself as reasonably well traveled (basing this on that one month in Europe) I dismissed this worry. I’ve negotiated my way through unknown cities without a map, in the sweltering(ish) heat, with a 15 kg backpack on. I’ve lived in communal rooms with people who don’t speak the same language as me. I’ve successfully navigated the European railway line. But having lived in Vienna for three weeks now I’ve come to realise there’s a big difference between the feeling of temporarily being in a country – anyone can wing it for a couple of days – and actually living somewhere for a full year. In other words, it’s slowly starting to hit me that this is, in fact, not a holiday.

So far, I’ve made the following observations about Vienna. It should be noted that all of these things have been learned the hard way;

1) Vienna is a country famous for Wiener schnitzel, a history of classical music, and – unfortunately – admin. No matter how much I tried to prepare all the tedious documentation before my move, I was bombarded with to-do lists from the ERASMUS office. Hidden fees, registering in every office in the city, becoming a temporary citizen; I can finally say (I think) I’ve filled in every form possible, which leads me to my next observation;

2) Austria does not operate on what I would describe ‘full time hours’. For instance, on returning the mass of paperwork to the appropriate offices, I realised never to assume anywhere will be open 9 – 5. The working week here seems to consist of 10-12, or perhaps 2-4pm if you’re lucky. It has taken me several disappointed journeys to remember this. Rush hour on the U-bahn is around 3pm, which is so bizarre coming from a country that believes in late night shopping and maximum profit opportunities.

Similarly, trips to the supermarket can rarely be impulsive. With closing times at around 6-7pm weekly, late night impulsive cravings for chocolate cannot be successfully met unless you are near a vending machine. Also, Austria takes their Sabbath very seriously, with next to no shops opening on a Sunday at all. This is often forgotten, and it always seems to be on a Sunday I realise I’ve ran out of bread or milk (or wine). Only a couple of supermarkets are licensed to open that day, and these should only be used in emergencies; the stress of being in the only grocery store open, pondering what to get for dinner whilst being pushed around in an extremely riotous crowd of the hundreds of others who were unprepared, is too much to sanely deal with. And, very importantly;

3) Do not fall asleep on the U-bahn. This can lead to missing lectures and/or extreme disorientation.

This all being said, it doesn’t take (too) long to adapt. Maybe when I return home I’ll automatically stock up food on a Saturday night, be surprised when a shop keeper replies to me in English, and remain extra vigilant on public transport. 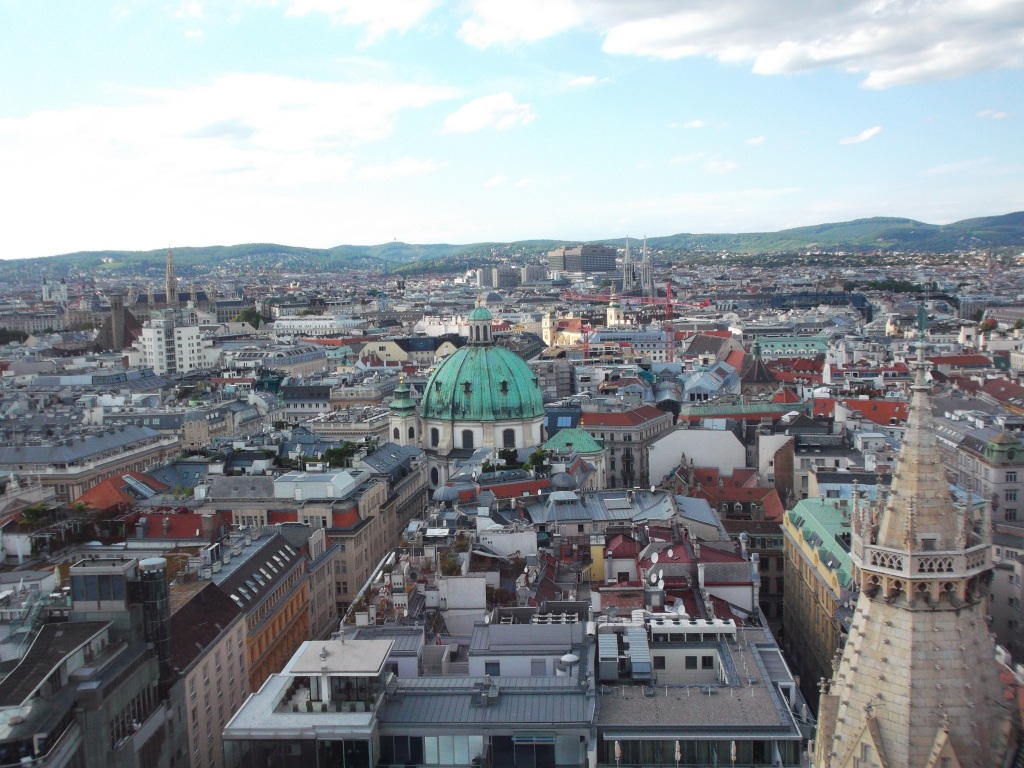 343 steps to the top of Stephansdom for this generic picture, don’t say I’m not dedicated!