The underground criminal system of Naples, Italy, might be the key to the city’s prosperous future.

In the sparse grand palaces of the Kingdom of Naples’ old capital, gold-plated carriages gather dust; forgotten but for a handful of inquisitive tourists willing to risk a venture into Italy’s “mafia city”.

Though if you want to experience Naples, you’d do better to navigate the winding cobbled streets of the city’s centro storico; the dark, pulsing heart of Neapolitan life. Here, locals greet in ballsy dialect, trade ruthlessly and fight each other to the death – seldom susceptible to the controls of the ‘imposed’ government.

A defence, in part, to centuries of bullying, tax-collecting foreign rulers, the Neapolitan mafia, the Camorra, grew out of the peoples’ need for an alternative system of rule with its own secret laws and independent courts. Though founded on some sort of moral authority, Naples’ organised criminal system today is better-known for its brutal villainy and the power struggles between its 100 criminal gangs.

“Mafia means organised crime,” explained Giovanni upon my arrival at the hostel in Naples. “Do you know of any city in which organised crime does not exist?” he pursued.

“erm, no…” I replied, having embarked on my weekend adventure from Rome with trepidation, carrying little and of little value in a nondescript khaki backpack.

“Exactly”, he pronounced. “There is mafia everywhere. Only in Napoli it is famous because of the films.”

Less well-known than its Sicilian counterpart, the distinct Neapolitan Camorra has grabbed the attention of the media since the publication of Robert Saviano’s best-selling account of life under Camorra control, Gommorah (2006), and its subsequent oscar-nominated film adaptation.

Without a doubt Naples is a bad-boys’ playtown. Young men prowl the streets in groups, dressed in sports jackets, tight jeans and trainers, with identical Tintin haircuts (short back and sides with wafty quiffs).

They race around the narrow alleys on their scooters, dodging cars and pedestrians, cat-calling to friends (“ayooooo!”) and slowing down for an arancino (fried ball of rice with a minced beef or mozzarella centre) at a street vendor, wolfed down without dismounting from the saddle.

“I have some bad news for you”, began Giovanni the morning after my arrival. “Gino’s pizza place was burnt out late last night”.

“They say it was an accident, but I don’t believe it,” he explained, shaking his head. “Gino doesn’t know how to stay friends with the right people.”

On the Via dei Tribunali, sorry customers peered in on the ruin of what was upheld to be the best pizzeria in the centro storico. In a message to his rivals, Gino declared to the press, “I do not surrender. I will rebuild a pizzeria more beautiful than the last.”

Saviano, in his exposé of the Camorra, dug deeper into the huge criminal network. Undertaking work as an assistant to a Chinese textiles manufacturer, he reports on the large-scale influx of Chinese goods to the Bay of Naples which are then quickly distributed across Europe with “made in Italy” labels; the poor conditions of Chinese factories contracted by the Camorra to manufacture goods which are then imported legally and illegally worldwide; and the alarming pollution caused by unsafe handling of toxic waste for Naples, China and Somalia.

My idea of Naples as dangerous had stemmed from the media’s extensive coverage in 2011 of the city’s rubbish crisis; which I would watch on repeat in the empty evenings of July alongside the Bolognese chef in whose restaurant I was waitressing, who’d offer only a vague sigh of “ah, the mafia…” in explanation.

From garbage disposal to drug-dealing, where there’s money to be made the Camorra has an interest, (or more likely a monopoly), over the protection of illegal transactions. The network pervades deeply into the society: it offers work, lends money, and even helps to clean up the streets when the government won’t.

The Camorra is so old and so ingrained that it has become part of the city’s make-up; residents accept its presence as tradition and feel powerless to do more than dismiss the violence and corruption with a shrug. Keeping quiet is also a question of “Omertà”; a centuries-old code of silence against the authorities. (It should be noted that Saviano has been condemned to a life under 24-hour police protection since the publication of his book in 2006).

On Friday I picked up a copy of the local newspaper, Cronache di Napoli. The newsagent laughed at my choice. “Wouldn’t you prefer the Corriere della Sera?” he suggested. “No” I smiled, “I’d rather read the regional newspaper”. He shrugged and handed it over.

Flicking through later, I could see why, (other than my foreigness), he thought it might not be the publication for me. Cronache di Napoli seemed to be designed for exactly the kind of people I had expected to encounter here. The front page featured mugshots of recently convicted criminals, including fifteen of the “Clan Castaldo” – two women and thirteen men sentenced to 128 years of prison between them for drug-dealing.

Turning over revealed page-after-page of sensationalist headlines: “Tabacconist kills rapist” and “Homicide at Enna, there’s an arrest”. The last ten pages (out of forty), were devoted to football.

Back at the hostel, I asked Giovanni about the Cronache. “Pezza di merda” (“Piece of shit”) he spat at my copy.

“The people who run that newspaper have mafia connections”, he explained. “The mugshots on the first page are to glorify the criminals. If your face is on there and people know you, you are recognised and have power.”

What’s more, “the newspaper is full of hidden messages for prisoners, who have no other access to the outside.”

If the Camorra’s influence on local media is worrying, more shocking is their hold on the law courts – as exposed in March of this year with the arrest of sixteen Neapolitan judges, accused of accepting bribes to issue financial rulings in favour of the Camorra. (Albeit less surprising, given that the ex-premier of the Italian State condoned tax evasion and owned the country’s largest broadcasting company.)

It’s not all bad for Naples though. Journalist Robert Neuwirth, in his new book “Stealth of Nations: The Global Rise of the Informal Economy”, predicts a bright future for the workers of the black market who make money on their initiative, independent of government controls.

Neuwirth calls the rise of the black market phenomenon in the current insecure economic climate “System D”, after the French word “débrouillard” meaning “someone who’s self-reliant or ingenious”. In an interview with Wired, he defined the “économie de la débrouillardise” as a “self-reliance”, “DIY economy” which covers “all the economic activity that flies under the radar of government”; that which is “unregistered, unregulated, untaxed, but not outright criminal”. In doing so, Neuwirth is describing a phenomenon which is a centuries-old way of life for many Neapolitans.

Shadow Markets of the World. The graph indicates the growth of the black market economy worldwide, which the Organisation for Economic Co-operation and Development (OECD) has predicted will employ two-thirds of the global population by 2020. 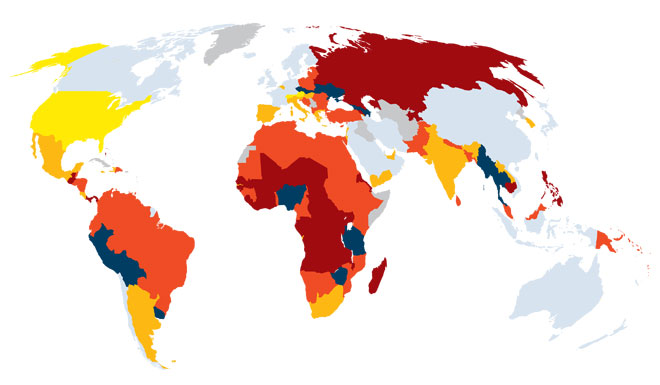 In times of economic hardship, the black market grows. When the British soldier and journalist Norman Lewis arrived in Naples in 1944 as part of the Allied takeover, he recorded in his wartime diaries how up to a third of the population had been driven into prostitution and over a third of Allied supplies had gone missing at the port of the Bay of Naples, swelling the black market.

He soon realised it wasn’t a battle he was prepared to fight in a region with neither government nor services, in an era of complete economic collapse. Observing a boy in a pharmacist exchanging English labels with Italian ones, he wrote, “It was no business of mine to interfere, and it would have made no difference had I done so…I am gradually becoming drawn into the system!”

As cities in Africa and China have more recently found, where the government will not offer jobs, the black market will. And will even give many the opportunity to achieve wealth and prosperity where they would normally be shut out. In the wake of a European financial crisis, the people of Naples, already well-practised in self-sustenance, will be prepared for a formal economic collapse.

Naples is a city of dark corners which can be dangerous; but it is also a place which is rawly and really human. When the painter Michelangelo Merisi da Caravaggio fled to the city in 1606 after murdering a rival in Rome, he painted the “Seven Acts of Mercy” for the chapel of Pio Monte della Misericordia; taking for his models not the idealised mythical characters of Roman taste, but the real, common people of the streets, to play out the gospel drama.

A man with a torch illuminates a Neapolitan street corner at night. A woman has come to offer her starved father her breast to suckle for food – the ultimate act of generosity.

Left to determine my afternoon plans, I couldn’t help but be intrigued by the criss-cross of streets known as the Quartiere Spagnoli in the south-west of the city, which Giovanni had labelled a no-go area to me and the boys.

I approached the area with caution, noticing the street population thinning out and men sticking together in groups of three. The narrow streets of the Quartiere run from the busy shopping centre of Via Toledo up a steep hill to the high-backed walls of churches and apparently unoccupied grand residential buildings. I peered up some streets, between flashing ‘pizza’ signs and hanging laundry, then risked an entry where two other tourists were descending the slope.

Peering into windows on my ascent I intruded on the private lives of the city’s poor, where cramped living spaces are exposed to passers-by: an elderly disabled woman laid out in a hospital-style bed; a young couple chatting to a neighbour kitchen-to-kitchen, divided by just a few metres of cobbled street; a group of middle-aged men smoking and playing cards in a disused ristorante. One family had set up a table outside their home, around which grandmothers, aunts and numerous children were assembled, sitting quietly in their manufactured outdoor living-room.

Naple’s is wild, bestial and poor. But it is also warm, abundant and a lot of fun. Its extraordinary legacy in being able to maintain its character in the face of imposed sanctions suggests we won’t be loosing the cultural gem any time soon. A European city with its own self-imposed system and heritage of innovation, might even prosper in the continent’s insecure future.