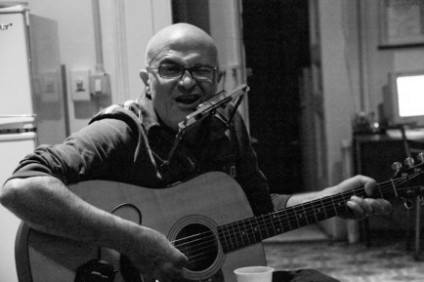 It’s easy to get to Naples by train from Rome. And with the weather hotting up I knew I had to go last weekend, or else I never would.
I was recommended a hostel and just booked it before I could give myself too much time to think about it – cue waking up on Thursday morning with thoughts of “Why?! Why not just stay in Rome where you have a room and a kitchen and don’t need to worry about packing many things into a small bag?!”

But I got over it, got organised, hopped on the train and went.

I was up the stairs and knocking on the door of “Giovanni’s Home” by 4 o’clock that afternoon. A nice girl from Wisconsin let me in and explained that Giovanni was in the kitchen.

I then received an impromptu lesson on how to make a spaghetti fritatta (fry last night’s egg-sauce pasta in high-walled frying pan, squash down and flip over till both sides are crispy) – the first of many fried southern delicacies I was to try over my three day stay.

Giovanni’s hospitality didn’t allow me to get out into the city until after six – because his introductory talk includes a historical tour of Napoli (with picture and cartographic references); Neapolitan criminal statistics in comparison to other European cities (surprisingly low); and several YouTube videos describing how, if someone were to mug you, they might do it.

I had cautiously decided to leave all valuable items back in Rome, though in hindsight it perhaps wouldn’t have been a problem. Because the hostel’s system of trust worked so well that people were leaving laptops, passports and digital cameras for all to see and rob on the dormitory beds.
Stepping out into the pavement was like entering another world; far from the wide grand vias of Roma. In narrow cobbled streets, cars, pedestrians and scooters scrabble for road-space. Two women on a scooter swayed precariously (the one on the back balancing their shopping) and had a near-miss with a man on another scooter coming round the corner. Both motors stopped in time and all three burst into loud cackles before moving on.
I stopped off at a street vendor for a fried zucchini flower; and another scooter pulled up beside me carrying two sweaty laughing boys ready for their early evening snack.
Neapolitans are loud and crude and loving. It’s a boy’s city and there’s a lot of bromance between the lads – who will call each other “bello”, answer the phone with “amico mio!” and kiss each other in greeting.

They look different from Roman boys too – shorter and with slantier eyes and pointier faces – perhaps something to do with centuries of far-travelled traders entering Italy via the Bay.

Despite the strong dialect and notorious football patriotism, locals and immigrants seemed better-integrated than in Rome – where one would never see an Italian grandfather with a dark-skinned grandchild; or a Transvestite leading a theatrical photoshoot in the middle of a piazza.

Naples has suffered from lack of government investment but things have got better recently with a new futuristic metro stop and, since Berlusconi’s de-railing, a bit of help with clearing up the rubbish.

Vesuvius looms over the city. And you can pay ten euros for a bus half-way up if it interests you to get to the top for a good view. I went to Pompeii instead on the earliest train on Saturday so I could walk around without the crowds. I didn’t want to pay for an audio or a guide or anything so I just sauntered around aimlessly following signs and guessing where I was.

There probably has never been a better time in history for a girl to travel on her own. It’s safe and acceptable. But people still remember the chivalric days when men felt obliged to help women out. Peering into the locked gates of Diocletian’s temple I noticed a short fat man in uniform with a chain of keys heading in my direction so I lingered opportunistically.

He jangled his keys, “Diocletian’s temple is only for bookings”. Before winking and breaking into a smile, “would you like to have a look?”

Lucio then proceeded to give me and impromptu and informative tour; taking every excuse to touch my arm and steer me in a new direction as I smiled and casually enlarged the distance between us.

The tour ended and he invited me into his hut, with the enticement of a free map. I lingered on the precipice as he turned off the television he had been watching and eating behind whilst on camera duty.

“And are you from Napoli?” I enquired, preventing him from being able to repeat his request that I should advance further. “No, I am from Pompeii!” he announced proudly, relinquishing the map and giving me several minutes of advice about where to go, along with a “special present” “from him to me” of a guide book to go along with it.

“Thanks a million” I smiled. And went in for the standard kiss on both cheeks – which turned into a face-off as he targeted my lips.

“You know Louisa, the people from the South are much more friendly. It’s not that we want anything from you, it’s just that we have a warmer culture.”

“Yes, I’ve seen! I think it’s so great! Really nice! So important!” I responded, scuttling off on my way to the Villa dei Mestieri.

I managed to avoid a further encounter by taking a steep brambly route off-track. He saw me and signalled I was going the wrong way, but I just smiled and waved and stubbornly persevered with my awkward trek, eventually arriving back on the map.

I got back to the hostel exhausted. Giovanni was singing: “Gi-ov-an-ni! Gi-ov-an-ni!”

“Have you made up your own theme-tune?” I asked.

I bought a famous Neapolitan pizza (3 euros for a margherita!) But I’m not going to rave about it. It was doughy and different from Roman pizza…I must be more of a pasta girl or something.

The hostel was very tranquil. A tall boy with white-blonde ringlets played classical tunes beautifully on the keyboard and I shared my day’s adventures with an Irish girl who was also on her year-abroad and an American student who was painfully burnt from a day on the beach on Capri.

I spent the rest of my stay traipsing round the city’s wonderful museums, galleries, dusty palaces and gloomy baroque chapels. If you’re interested in black market art trade I’d advise you to look into stealing from Naples because the security was shockingly minimal in comparison to the treasures the buildings were supposed to be safeguarding. It’s great for visitors though because there are also very few other people looking round so you can pretend you live in the palace and dance around the ballrooms like they’re yours (I didn’t).

Back at the hostel that night I was about to go to bed when Giovanni asked me if I wanted to go on a scooter ride. “Louisa, but you haven’t seen half the city and you’re going tomorrow!” It was very sweet of him. And he bought me a coffee and pastry from a famous cafe in the centre. We went all the way to Pozzuoli (the town in the middle of the other volcano) and sped up to 100 mph. My eyes skimmed the 30 speed-limit sign but I chose to stay calm and laugh – I’ve lived in Rome long enough.

The next morning I left early (after an exaggeratedly traumatic farewell to Giovanni), stopping off at some museums and churches I’d missed on my way, with just a small well-packed rucksack to carry.

I really did have such a great time. I don’t really see how you couldn’t. So if you’re thinking of a weekend break in Italy, choose Naples over Rome. It’s like the difference between Glasgow and Edinburgh: there’s slightly more chance you’ll get stabbed; but you’re almost sure to have a hell of a lot more fun.