Via Principe Umberto. Or ‘Home’ to Claudio and Silvia, the chinese mafia, the local whorehouse and I.

The last week in Rome has been politically turbulent in the aftermath of Berlusconi’s resignation. I passed by the Quirinale on the night to witness the celebrations and scrambled through flag-waving crowds and casual groups of posing policemen to try to get a glimpse of his flight. Only for him to avoid the booing crowds by slipping unobserved out of a side exit. 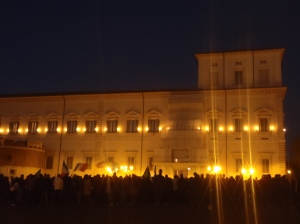 I have become friends with an Oxford graduate who is interning as an assistant to the Guardian’s correspondent in Rome, whilst au-pairing for a demanding Italian family in Trastevere. As an aspiring journalist, she also writes for several online publications and has been asked to compose an article on the reactions of Italian young people to Berlusconi’s resignation. And how they believe the current political and economic crises might influence their behaviour in the near-future and prospects in the long-term.

We organised an interview with my Italian flatmate and two student friends. Knowing them to be active protesters, I was surprised at their claims of ‘disinterest’ in politics. They feel powerless to act wisely in the face of the economic and political crisis. Nor are they confident that they will be able to find paid work after graduation. And admit that they are likely to have to go abroad to find work. Though resoundingly affirm to re-settle in Italy and have families, around the age of thirty.

For their parents’ generation, it was the norm to marry young, in their early twenties. Today, largely for economic reasons, young people are marrying later, only once they have secure jobs and financial independence. Though it is not uncommon for married couples to continue to rely heavily on parents for finance and childcare. Financial insecurity is blamed for the phenomenon of the ‘bambiccioni’ or ‘big babies’; those in their late twenties or early thirties who continue to live and be supported by their parents. The press often associates this predicament with laziness. I’m not sure. Certainly, their parents worked very hard, without the same expectations of being able to fund lengthy degrees (on average 5 years). And I don’t know any Italian students with part-time jobs. On inquiry, most suggest vague intentions to search for something in the summer, but for now claim to have time only for their studies. I sense that there is little pressure from parents who are proud to be able to support them.

However, this comfortable student life looks likely to expire for the next student generation in Italy, and there is a general awareness of this.

Rome is a city which is slow to change. I find comfort in this. Traditions are well-preserved. Even Berlusconi is avowing his intention to be once again loved by all of Italy. And has released an album of co-written songs to console himself with expected gross sales. A Spanish erasmus student has ironically appropriated the name ‘Silvio’ for his kitten. So he’s set to continue to be a character in my Roman life. 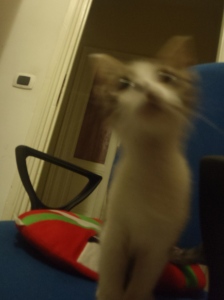 I’m writing in the park in the piazza of vittorio emanuele (my zona), occasionally hopping benches to avoid drunks/suspicious gentleman/potential traffickers. It’s an international area, but overall, locals seem to mingle well. I had a chat with a group of middle-aged Italian friends, one of whom works as a ‘solderer of eyes’ from what I understood…perhaps a lazer eye surgeon? I feel I need to devote more time to language studies. I nod and smile. At least this way they will be encouraged to continue to speak in Italian.

It may be the Red-Light district and famous home of the Chinese mafia, but vittorio emanuele has its charm. I’m even on greeting terms with the homeless alcoholic (red-head, pale-skinned, perhaps of Scottish origin) who is usually slumped against one of the portico columns by the metro entrance. 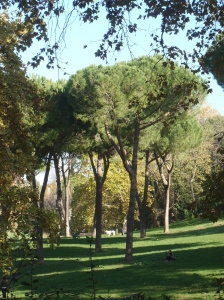 And being so close to Termini has its advantages. Trains in Italy are cheap so I can easily get out of the city whenever I please to discover beautiful villages, olive groves and lakes. On Saturday I made a morning trip to Castel Gandolfo, the pope’s summer residence, with an ice-cream scoop Bernini church and a stunning lake where rich Romans go to kayak and sail on their weekends.

Then on Sunday, to Parco Appia Antica where we hired perilous bicycles (dodgy breaks) and traversed Roman ruins through the national reserve. It didn’t feel like Rome at all, more like a holiday camp. Lunch options were limited to touristy restaurants, but we managed to come across asemi-hidden ‘tropical garden’ cafe where a large Italian family were lunching and offered us some warming polenta.

Term is flying by and I ought to be getting to know the library better, but then I feel like I learn more from adventures in the city, meeting weird and wonderful characters. My attempts to become a regular at the nearest c 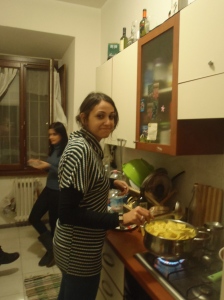 afe have been more successful. It’s where all the local lads hang out so I feel too intimidated to enter if they’re all lolloping around the entrance. I had a ‘cafe and cornetto’ on a quiet Saturday morning and chatted with Claudio and Silvia, two of the bar owners. I hope to become a regular.

Though, when dreamily perusing the paper in my morning daze, I become generally aware that everyone is talking about me, catching snippets of conversations, ‘ragazza’, ‘girl’ or ‘straniera’, ‘foreigner’. I shall persevere.